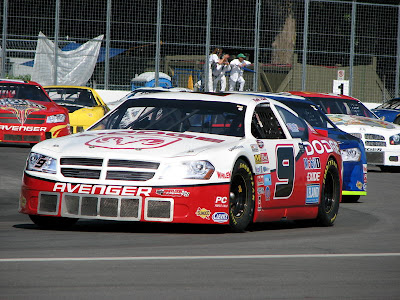 BARRIE, ON – While last weekend’s NASCAR Canadian Tire Series race at Montreal’s Circuit Gilles Villeneuve was a highlight of the season for many of those associated with the series, the on-track result was anything but for Mark Dilley and the #9 Dodge / Mobil1 / Exide / MOPAR / Leland / Wild Wing / CRS Dodge Avenger team.

The thrill of racing in front of packed grandstands in the inaugural NASCAR race weekend at the legendary Formula 1 road course was Dilley’s only consolation, after transmission troubles dramatically slowed his pace around the 4.361 km circuit on Ile Notre Dame. After starting 12th in the field of 31 the Barrie, ON racer lost first, third and fourth gears just 10 laps into the race, and was left to soldier home to a 21st-place finish, two laps back of the leaders.

The result was all the more frustrating given that in the early laps Dilley was passing cars with ease and was excited about his potential for a top finish. “I had probably the best car we’ve ever had at a road course,” said Dilley. “If anything, we might have been a bit shy on horsepower because it wasn’t intended to be a road course motor. And then we just broke first, third and fourth gears out of the ‘tranny’, so we rode around in second gear after that point. But before that, I think we were as high as sixth. The car was good and it was amazing how well it was
braking and turning. But bad luck got us.”

The entire Montreal NASCAR race weekend was presented by Dodge, which was bittersweet for Dilley, given the result. “It was an incredible event and we were glad to be part of it with so much support from Dodge. The frustrating part is that we weren’t able to give them the top finish we were hoping for.”

Dilley’s tough run in Montreal came on the heals of an equally difficult tour of western Canada, in which the #9 Dodge-sponsored Avenger finished 15th in the British Columbia Dodge Dealers Dodge Avenger 300 (on July 15) and 11th in the NASCAR race at the Grand Prix of Edmonton (July 21).

“That was a tough deal out there,” said Dilley, of his outing at Vernon, BC’s Sun Valley Speedway. “That’s never been one of my strongest ovals. My goal was to go there, lead a few laps to help us out in the points, and maybe get a top-five.”

Dilley continued, “DJ [Kennington] and I tagged coming off the corner and we spun with like nine laps to go. I went down and hit the inside wall. We were fifth at that point, so things were looking good until then. It’s horrible to see a good finish go away like that so close to the end. And it took us from leading the points to taking a big hit.”

Hoping to bounce back the following weekend, in Edmonton, Dilley realized almost immediately that it wasn’t to be. “My engine blew up a lap into our first practice. And then we got just one lap under our belt in the second practice, before qualifying. In the race, I was punted off when everyone checked up except for the guy behind me. I came back on in 17th and made it up to 11th and then the race was over.”

Still smarting from his run of bad luck, Dilley is optimistically ready to start the second half of the NASCAR Canadian Tire Series schedule this Saturday night at Mosport Speedway. “All in all, it’s been a tough few weeks. I’m hoping we got our bad luck out of the way in one stretch. We have lots of work to do to get back into contention for the championship,” said Dilley, who is sixth in the standings after six events. “We’re looking forward to Mosport this weekend, but the car we’re taking there was the one that was damaged at Sun Valley, so we won’t have an opportunity to test it before the race.”

MONTREAL NOTEBOOK: The inaugural NASCAR Canadian Tire Series race at Montreal’s Circuit Gilles Villeneuve was witnessed by grandstands jammed to capacity with enthusiastic fans. Quebec racer Andrew Ranger was the crowd favourite and looked set to take the victory until a daring move by Kerry Micks in the final turns propelled him to the front. From there, he was able to survive a side-by-side drag race to the checkered flag, nosing ahead of Ranger by one-tenth of a second at the finish line. Robin Buck took third to earn the final spot on the podium.

LOOKING AHEAD: NASCAR heads to Mosport Speedway
Next, the NASCAR Canadian Tire Series returns to Ontario this coming Saturday (Aug. 11) for a 200-lap race at Mosport Speedway.

Prepared by Inside Track Communications // For more information about the #9 Dodge team and its sponsors, visit http://www.whitlockmotorsports.com/ . For more on the NASCAR Canadian Tire Series, including complete race results, reports, point standings, event schedules and upcoming broadcast times for races on TSN, see http://www.nascar.ca/
Posted by Egypt Conflict at 11:55 AM