Novartis: Having & Eating Its Cake

It’s tough to be both a financial and a strategic investor. Which is why corporate VC has generally fared so poorly. If you’re out for returns, then you want to maximize the value of the company you invest in. If you’re out for product rights, you don’t. 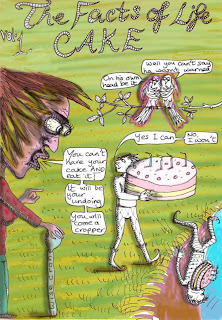 For the last 10 of its 11 years, Novartis has been running a VC operation, originally as a way to fund the ideas of Novartis executives and scientists who’d been restructured out of jobs but later as a more or less pure returns-focused venture operation.

But now Novartis, like many companies before it, wants to have its VC cake (newco’s products) and eat it too (newco’s returns). Thus the interesting Novartis Option Fund experiment (confusingly, one of two option funds for Novartis as a whole—the other one is run by the pharma division and operates as a side-by-side fund with MPM Capital). Start-Up has discussed the funds briefly before, but Novartis Option now made its first investments, leading a $9 million round in RNAi delivery company Cequent Pharmaceuticals and a $14 million round in a re-start company called Adenosine Therapeutics.

The option fund works like this: along with its founding investment, Novartis Option Fund buys an option for a single program (any company Novartis Option invests in must have at least three programs--so that Novartis isn't exercising virtual control). The option comes with a pre-negotiated licensing deal and can be exercised at one of three increasingly expensive points: lead optimization, pre-IND, and first-patient dosing. Thus with Cequent, Novartis tops up a Series A led by Ampersand, Nexus and Pappas and, simultaneously, bought an option for another small amount to a inflammatory bowel disease program. With Adenosine, Novartis got an option to its A2B receptor antagonist program (Bristol has rights to its Phase III A2A agonist).

Clearly, the other VCs wouldn’t let the program go for nothing, but Novartis’ VC boss, Reinhard Ambros, argues that it's in Novartis' best interest to sign a market-priced deal as well. If it’s too cheap, he says, the start-up won’t work on the program—since Novartis has only one seat on the board, it can’t force things. And a cheap deal “hurts our investment returns,” says Ambros, which determine his annual bonus. If it’s too expensive, Novartis’ research group won’t exercise the option – and so has wasted its option price.

Meanwhile, Novartis Pharma’s option fund, the MPM Pharma Strategic Fund, is looking for later-stage programs—and according to the Novartis executive who oversees it for the company, Corinne Savill, will soon close its first deal. We'd earlier reported that the fund was looking to pick up product options without paying anything more than its equity. Not true, says Savill: they'll be paying option fees. You can't get something for nothing.