Once in a Blue Moon: SGP's Stock Offering 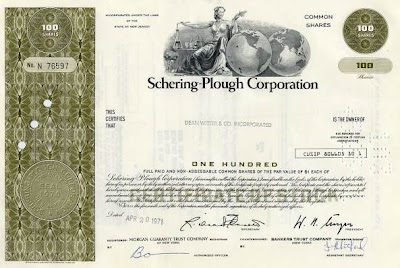 When everyone and their pharmaceutical brother decides it's time to buy back their own stock, leave it to Schering-Plough to buck the trend.

The Big Pharma, fresh off the news it had emerged from the five-year old consent decree after righting all the wrongs at two manufacturing facilities ($500 million for the poorer, though), said it was selling a boatload of stock. The proceeds of this expected offering will cover some of the expense of its $14.5 billion cash takeout of Organon BioSciences, announced earlier this year (we covered the acquisition in depth, here).

The move marks the first time in decades? that a Big Pharma has decided to sell common stock to public investors (there have been plenty of debt financings and lots of cash raised via many divestments and spin offs, but zero equity offerings in a very long time as far as we can tell).

Schering-Plough is selling 50 million common shares (plus up to 7.5 million more in the greenshoe), which at yesterday's close would rake in nearly $1.5 billion toward the Organon tab. Simultaneously the company said it would sell $2.5 billion in convertible debt.

The fact is that Big Pharma rarely need to dilute shareholders since debt is readily available and they are often sitting on piles of cash that -- thanks to strong cash flow and goofy measures like the American Jobs Creation Act (oh yeah, how'd that go?) -- can resemble some of the minor peaks in the Alps. In fact most go out of their way to appease shareholders by buying back shares, the wisdom of which we question here.
But Schering-Plough has enjoyed success of late with Vytorin and Zetia, and has been growing both its top and bottom line nicely--so why not take advantage?
Posted by Egypt Conflict at 10:50 AM