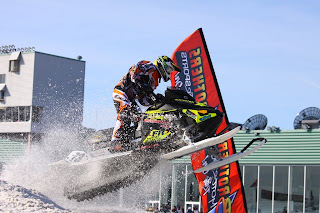 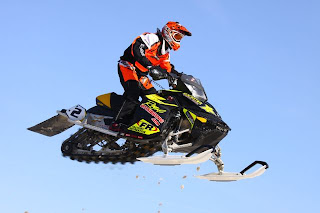 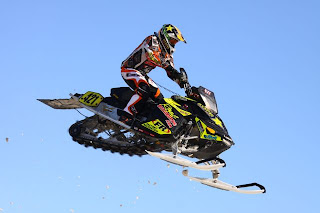 Sarnia, ON - Over 850 loads of snow were brought into the Hiawatha Park track in Sarnia to produce the huge and challenging track.  The track contained big jumps and very challenging rhythm section.  As soon as Pro Lee Butler saw the track, he got excited at the sight of the rhythm sections.

The Royal Distributing Rockstar team welcomed a couple of new faces for the weekend.  Fifteen year old ISOC junior standout Zak Mason rode one of the teams Factory Recreation XP’s for the weekend.  Zak showed absolutely amazing speed all weekend with a victory in CSRA Junior 14-15, and a second in CSRA Junior 16-17.  Zak overcame a first lap mishap in Sunday’s Sport 600 final to catch and pass the entire field, including a dramatic final lap in which he moved from fourth to first.

Semi Pro rider Dylan Hall had an excellent weekend with podium finishes in both Saturdays stock final and Sunday’s Semi Pro Open final.  The outstanding rookie now sits in second place in the National standings in Semi Pro Open.  “I am so excited to be able to run up front every week, the equipment is awesome and I am getting more comfortable every week riding with the Semi Pro Guys.” quipped Dylan after a hard fought third place in the stock final on Saturday night.

Lee Butler came into the weekend tied for the National Pro Open championship race, and after two firsts in his moto’s and a valiant 2nd place in the final, Lee remains tied for the points lead with Iain Hayden.  In Saturday night’s Pro Open final, Butler overcame a poor start to chase down and pass into second place, but the laps ran out on Butler as he came up just shy of the victory at the finish line.  “Just ran out of laps there at the end, I knew once I moved into second place I could have a chance to reel him in, but time ran out.  Its gonna be exciting at the next National, that’s for sure!”

In Sunday’s Pro Stock final, Lee Butler holeshotted followed by ISOC Pro racer Steve Taylor, who was piloting Joey Sagan’s Royal Rockstar sled for Sunday’s CSRA Pro Stock action.  After moving out to a comfortable lead, the Rockstar Rev XP’s were setting sail.  Unfortunately, after an awkward landing, Butler was forced to pull off, after injuring his leg.  Steve Taylor continued on and notched the victory for the Royal team, to keep the Rockstar XP’s on the podium in every final.

Posted by Egypt Conflict at 7:32 AM