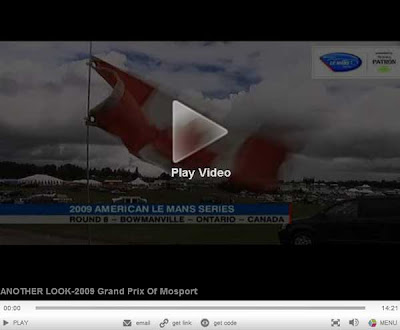 ANOTHER LOOK: 2009 MOSPORT
A championship-winning day for Acura and history for Corvette Racing

Mobil 1 presents the Grand Prix of Mosport turned into a banner day for Acura. David Brabham and Scott Sharp drove their Patrón Highcroft Racing Acura ARX-02a to an overall victory and clinched the LMP1 manufacturer championship for Acura, the marque’s first in the American Le Mans Series. Luis Diaz and Adrian Fernandez won in LMP2 for the seventh time in eight races to wrap up the class’ drivers title in their Acura ARX-01b.

Lowe's Fernandez Racing and Corvette Racing each wrote their own history at Mosport.
Fernandez and Diaz grabbed the class driver championship after a fantastic battle with Dyson Racing’s Marino Franchitti and Butch Leitzinger. The Dyson Lola B09/86-Mazda coupe led by less than a second with 12 minutes left before the engine let go and forced Leitzinger to pull the car off track and to a stop at Turn 2.

Johnny O’Connell and Jan Magnussen scored a historic victory for Corvette Racing with the team’s first in GT2. Magnussen crossed the finish line in his Corvette C6.R 0.331 seconds ahead of Risi Competizione’s Pierre Kaffer, who teamed with Jaime Melo.

The win at Mosport was the third straight at the venue for the O’Connell-Magnussen pairing and fourth in their careers.

From ALMS
Posted by Egypt Conflict at 7:09 AM