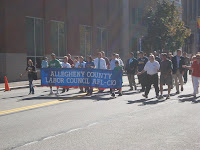 Democratic Vice Presidential nominee Joe Biden canceled plans to appear in Pittsburgh's Labor Day parade. Biden says he did so out of respect for people affected by Hurricane Gustav. He kept on his schedule an appearance in Scranton later in the day. Several other public officials participated, including Governor Ed Rendell and U.S. Senator Bob Casey.

Pittsburgh's Labor Day parade is one of the nation's largest. It was expected to draw around 60,000 people.
Posted by Egypt Conflict at 10:29 AM