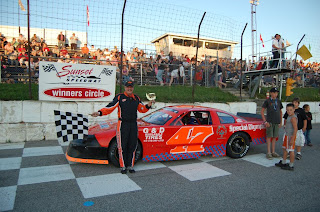 STROUD, ON - On the afternoon of August 30th, the usually stoic and focused Tom Walters, offered up a prediction to the dozen or so fans and crew members milling about his hauler; He would win both of the nights HF Smith Home Hardware Late Model features. 'Stompin' Tom started off the night with a win in the make-up feature from August 23rd. Starting towards the front of the pack, the Blue Jay Catering #47 had the lead by lap 5 and never looked back, despite a torrent of cautions and a late race charge by the #11 of 2007 defending champion 'Mr Excitement' Chris Morrow. With a feature win already in the books, a repeat would prove difficult, as Walters found himself starting near the back of the pack in the second 30-Lap HF Smith Home Hardware sponsored event.

The second verse was the same as the first, as Walters hounded the #03 of Dario Capirchio for the lead, while trying to hold off Morrow and the #19 of Jason Witty. Just short of the half way mark, Walters squeezed into the lead and managed to keep Witty and Morrow at bay for his second feature win of the night. "I'm not usually cocky before a race" beamed Walters "but tonight I just felt good, the crew gave me a great car and I really felt like the one to beat. This second one wasn't any tougher than the first, I was battling with Chris [Morrow] there and he left the door open on the inside, so that was that. I stayed smooth all night, and here we are". With these wins, Walters padded his already vast points lead over 2nd place Chris Morrow, as he works towards a 25th championship.

The Dominos Pizza Thunder Car feature proved a much different outlook for a fellow Walters; Points leader, 'The Cheque Casher' Herb Walters was looking for a 4th straight feature win, and seemed to have the car to beat. However, lady luck would have something to say about that before all was said and done. Walters' started the feature just one row from the very back of the field, with about 15 cars sitting between himself and inside pole sitter 'Slick' Rick Walt. Walters worked diligently to creep into the top three, before doing battle with the #7 of Charlie Smith and the #96 of 'Mad Dog' Larry Mackenzie, all trying to take a stab at the top spot held by Walt's Amsoil sponsored #13.

A late race caution set the stage for a four car shoot out, with a result no one expected. As the green flag was displayed, the entire field charged forward, except the leader. A mechanical problem kept Rick Walt's Monte Carlo from gaining speed, which resulted in second place Walters piling into the back of him, sending both cars to the back of the pack. From there, all Larry Mackenzie had to do was hold off the #7 of Smith for his first win of 2008.

Mackenzie was as surprised as anyone in victory lane. "I think I got a little lucky there, with [Herb] having to go to the back, because he was coming strong. This is my first win in a Thunder Car in about 8 years, so we'll take it. I just want to thank Dave Horner for helping me put all this together".

In the Fox's Bakery Four Cylinder Road Runner division, the crowd was treated to a breakthrough victory two years in the making. 'Smokin' Joe Ireton comes from an excellent racing stable, Epic Motorsports. You might have heard of them. The same guys that brought you two time champion 'Classic' Colt Carcone and 2007 defending champion 'Hollywood' Matt Henderson. Starting mid-pack, Ireton looked every bit as good as his championship caliber running-mates.

Lapped traffic and slower cars, as they often do in the Four Cylinder divisions, played a large part; However, Ireton kept a cool head coming through the pack, and with 5 laps remaining found an opening underneath the leading #8 of Rob Gibson Jr. With the #48 car of 'Mr. White Walls' Nick Brown tattooed to his back bumper, Ireton picked up his first ever feature win.

'Smokin' Joe could hardly find the words after the race, "That was probably the most intense race I've ever ran. It was insane. I hope to get a couple more before the season's out, but this division is so stacked, there's about 10 or 12 guys that can win on any given night. I just want to thank all my crew and the fans here for supporting me, I also want to thank Dan 'Rover' Nolan, he's not here tonight but he's done everything on this car and without him I'd be nowhere". A story within the story was also brewing Saturday night.

'Too Quick' Kenny Britt and Dave Burrows came into the night tied for the points lead, and had placed almost equally all through the night, with the slight advantage going to Britt. However, on lap 14, the outcome of both the feature race and points championship was changed dramatically. While Britt's #14 was battling for position inside the top 5,  he came around to lap the much slower #05 of rookie driver Brad Burleigh; Though the blue passing flag was displayed, Burleigh refused to move out of the path of the leaders, instead forcing cars to pass on either side.

As the quicker cars went sailing by, Burleigh inexplicably lost control of the car, careening into Britt and sending him into the wall. "We had a real good car tonight. Lapped cars.what are you going to do?" shrugged a disappointed Britt after the race, "We'll have another car out next week and we might surprise some people".

Saturday August 23rd was a record setting night for both the Fox's Bakery Four Fun division as well as driver of the #9, Marshall Pender. The Beeton (Ontario) native began the night with a wall shaking crash that ended his Four Cylinder Road Runner rookie bid. "We hit the wall pretty good in practice, so the [Road Runner] is done for the year. But we'll be back out in 2009, right now we're just focusing on the Four Fun".

Focused was certainly the word of the day for Pender, as he took home wins in 5 of the 6 races he competed in. The tally at the end of the night read, 3 heat wins as well as both feature wins. A new record for the Four Fun division. "We've just been good all night, the second feature was pretty tough, Rob Krystal was coming on at the end pretty good. I'm happy we pulled it out, and as long as we're still allowed to race we should have a good shot at the championship."

Posted by Egypt Conflict at 7:19 AM