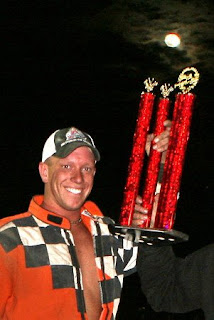 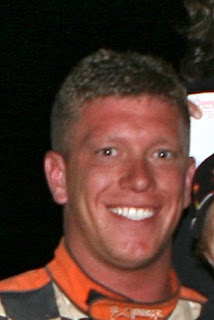 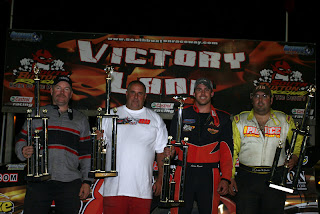 Leamington's Justin Coulter stunned the Schinkels Gourmet Meats UMP Modified class by winning the championship race on just his third night in the car while Cottam's Rob Quick made a late pass to win the Garage Restaurant Comp 4 title. The championship night, however, was marred by a terrifying accident earlier in the preliminary races.

Leamington's Paul DeGoey was seriously injured in a Modified heat race when his car flipped several times after being struck on the driver's side while going through turns three and four. DeGoey slipped in and out of consciousness as the track's Emergency Medical Response unit, along with its volunteer fire and safety crews stabilized the driver until Chatham-Kent EMS and fire services arrived. Firefighters from Station 16 Raleigh South had to cut the roof off the car to allow paramedics to safely remove DeGoey.

DeGoey was transported to Chatham hospital and immediately air-lifted to London's Victoria Hospital. He was moved out of intensive care on Sunday and is listed in stable condition. Coulter said his family is relieved to hear of DeGoey's progress. "It's been really tough on my dad, he's been pretty emotionally upset by it," said Coulter of his father Curtis, the other driver involved in the accident. The throttle stuck on the elder Coulter's vehicle as he entered the corner, shooting him up the track into DeGoey.

"We're glad everything is going to be OK," Justin said. "Our family has been praying for him. We'll all be really happy when he's out of the hospital and home again." Reaume's championship victory was a Sunday drive - literally - as the green flag to start the race fell after midnight and he had his car on cruise-control the 30 entire laps to win his fifth straight feature and sixth of the season. "We just kept it smooth, concentrated on hitting our marks and tried not to get in the rough stuff and screw up," Reaume said of his coast-to-coast win.

Chatham's Joe Field won the battle for second place, as Thamesville's Dale Glassford, Kirk Hooker and Jim Jones, both of Chatham, rounded out the top five. Reaume said his second straight points and championship titles are a bonus to his ultimate goal for the season. "The big goal is still the Shootout," he looked ahead to the Castrol Canadian UMP Late Model Shootout on Sept. 27, which pays $6,000US to win.

"This run has been good," he said of finishing the points season with five straight feature wins. "It means we're finally starting to pay some bills and get caught up." Reaume finished with 719 points to win the points title, 16 ahead of Glassford, the runner-up for the second year in a row.

His troubles climaxed on mid-season championship night, when he finished the race on his roof, about 25 yards shy of the finish line. "We had a good car that night, until we had problems," he looked back at the turning point on July 5.

"The guys thrashed really hard after mid-season, we got things rolling and everything just fell in place," said Clements, who finished the season winning three of the last five features. He officially wrapped up the points title with his heat and pursuit wins earlier in the night before leading all 25 laps of the championship race.

"The first couple laps after a restart, I could hear Eric (Vanderiviere) but I could never see his nose," he said, as his Taylor Avenue neighbour second. Wallaceburg's Gary Vyse, the mid-season champion, was elevated to a third-place finish after Chatham's Todd Wellman failed post-race inspection. Kingsville's Rob Young and Essex's Gerald Martin rounded out the top five.

Clements won the points title with 484 points, 40 up on Vanderiviere and Dick, who tied for second. Justin Coulter thought his chances of winning went out the window when he pitted under caution early in the race for what thought was a flat tire. "The guys checked it out and said the tires were all up, but yeah, I thought I was done," the 29-year-old said.

After restarting at the back, he quickly powered through the field, taking the lead from Shrewsbury's Jim Dale Jr. after a restart on lap 13. "He put a slide move on me in one and two, and then I lost it in three and four, just trying too hard," said Dale Jr., who went from first to fourth on one lap. Coulter made the pass on the inside, knowing his car was faster on the low line.

"I took that chance, pulling that little slide job off and thank God it worked," he said of the winning pass. Coulter continued to run the low line the final 12 laps to win his the first championship of his career. Dale Jr., the mid-season champion, rebounded for a second-place finish, followed by Merlin's Brad McLeod, Curtis Coulter and Woodslee's Clayton Smith.

It was only Justin Coulter's third night in his modified car this season. He drove part of the season in Jason Haskell's late model. "I was planning to run it in the Shootout," Coulter said, as this year's event includes the UMP Modified Canadian Fall Blowout for the first time.

"My dad told me to bring it out here to get some seat time," Coulter smiled, as his father's advice led him to a championship ride. DeGoey is the Modified points champion as he finished 50 points ahead of Dale Jr., while Curtis Coulter slipped to third after the final tabulations.

Nate McNally of Charing Cross was three laps away from adding the championship race to his points title when Quick rallied to spoil his bid. "I could hear him back there," McNally said of Quick. "The car got a little push in it and washed up, and that allowed him to get under me."

Quick said he was content to run second and wait patiently for his opportunity to make a pass. "I just tried to stay back and stay out of trouble," he said. "I put the nose under him to let him know I was there. In the mid-season (championship), I hurried to get to the front and got wrecked. Tonight, I just took it easy and did the job."

McNally hung on for second, followed by two Young Guns - Clinton Van Dyk, 15, and Shawn Jones, 16, both of Blenheim. Norm DeSerrano of Kingsville was fifth, while two more Young Guns had top-10s - Reid Fenton, 15, of Blenheim, and Jason Arnel, 17, of Chatham.

While McNally was disappointed with his second-place finish, he was more than satisfied with his points championship. "That was our goal going in to the year, to win the points," he said. "There's always next year for the (championship) race." McNally finished with 519 points, while Quick was second with 506.

Pit Notes: *None of the four mid-season champions - Dale Jr. in the Late Models and Modifieds, Vyse in the Sport Stocks and Leamingtion's Brandon Windsor in the Comp 4s - were able to follow up their wins on Championship Night.

* One of the biggest cheers on the night was for Mechell Van Dyk, after driving her No. 88 Comp 4 car to her first victory of the season in the second heat race.

*South Buxton Raceway's management and officials were appreciative of the fans' patience on Saturday, as the race night went well beyond midnight as a result of the rescue efforts in the DeGoey accident and an extended intermission to finalize the points standings.

*Fans can become a part of the Castrol Canadian UMP Late Model Shootoutand Modified Fall Blowout at the Sept. 27 event. For $50, fans can sponsor a lap and have their name posted on the Shootout Fan Lap Board, which will be displayed at the track. Fans can use their individual name, their family name or dedicate the lap in memory of a loved one. Everyone who becomes a lap sponsor will be entered in a draw for four tickets to the event, a value of $100.

*There will be Mechanics and Powder Puff races, after all. Scott Mihalco received several requests from drivers for the special races, which will be held on Sept. 13, the second of two extra non-points race nights. The first extra race night will be this Saturday, which will include trophy presentations to the points champions, top rookies and most sportsmanlike drivers in all four classes. These nights will not be rescheduled, in case of rain. There will be no races on Sept. 20, to allow track workers to get the facility prepared for the Castrol Canadian UMP Late Model Shootout/Modified Fall Blowout on Sept. 27.

Posted by Egypt Conflict at 6:37 AM