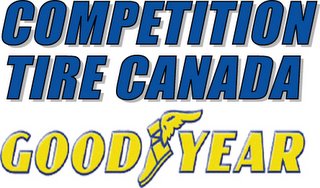 December 27, 2005, Niagara on the Lake, ON – Competition Tire Canada will be posting Goodyear Racing Tire contingency awards at each series event for 2006, the Pro Modified Racing Association (PMRA), www.ProModifiedRacing.com, is pleased to announce.

“The PMRA has proven itself to be a winner in a short time,” explained Craig Fairchild of Competition Tire. “We want to be a part of this, and we will pay a contingency award to the low qualifier and winner of each event if they are running Goodyear Racing Tires.”

Goodyear's racing heritage reaches back almost to the very first car race at the turn of the 20th century. In those early years auto makers were just beginning to see the wide-open possibilities of a sport called automobile racing. From then until now -- with one major interruption -- Goodyear's enthusiastic involvement with motorsports has grown as fast as the size of the crowds. The company produces more than one-half million tires a year for races of all kinds, all over the world.

“Goodyear has won more racing championships than any other tire company in the world,” stated Bruce F. Mehlenbacher, Director of Operations of the PMRA. “I have known the Fairchilds and Competition Tire for over 20 years and their company has a major history with motorsport. Having them involved in the PMRA series is very exciting news.”

Competition Tire Canada is one of Canada’s top auto racing suppliers. Based in the Niagara Peninsula, Competition Tire has been offering quality Goodyear products and service for over two decades in road course, oval track, and drag strip racing. For Information contact: 905.684.7418

At present, the PMRA has three events confirmed for the 2006 season, the KC Auto Parts Family Day Celebration at Toronto Motorsports Park in Cayuga, ON Saturday, June 24, and the Pro Modified Racing Association is pleased to be running inaugural events at St. Thomas Dragway in Sparta, ON August 5 and 6 and at the Grand Bend Motorplex, over the Labor Day weekend.

PMRA officials are in negotiations with several tracks at present for 2006, both eighth and quarter-mile tracks in Ontario, Quebec, Michigan, New York and Ohio with the plan of presenting a six -event drag racing series in 2006.
Posted by Egypt Conflict at 8:26 AM