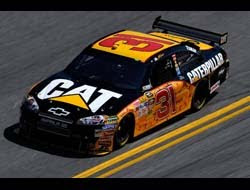 Sports betting players should check out the Shelby American at Las Vegas Motor Speedway on Sunday, because even though a familiar face won last week at California, there’s a team that has shown massive improvement from last year over the first two weeks of the season, and one of their drivers will snap a 43-race winless streak.

Jimmie Johnson (+400) is proof of the old saying, “you have to be good to be lucky, and lucky to be good”, and the four-time defending champion showed why at California. Granted, he led a race-high 101 laps en route to the checkered flag, but he was in danger of going a lap down after he was caught in the pits on a yellow flag. He beat the timing line into the pits, and instead, came out the race leader. Johnson has been a force here, winning three straight years from 2005 to 2007, and he led 92 laps last year before fading to 24th.

It was Jeff Burton (+1500) who Johnson just beat out for the lead, and the No.31 driver has a pair of wins at Las Vegas, although they haven’t come since 1999 and 2000. However, Burton finished third here last year, and his 9.8 average in 12 races is the best among active drivers.

Kyle Busch (+700) won the pole here last year, and then won the race while starting at the back of his hometown track because of a changed engine. Bookmaker odds (bookmaker reviews) for the No.18 driver are usually pretty solid, as he may have the most pure talent in all of NASCAR, but he can be hit-and-miss, especially when he has a bad car. To his credit, Busch’s car was terrible in California, and he drove it to a 14th-place finish.

Two drivers to watch if you’re looking for some sportsbook value are Matt Kenseth (+2000) and Joey Logano (+3000). Kenseth won here in 2003 and 2004, and he’d like to avenge last year’s trip to Vegas, when he was a favorite in your gambling software to win after taking the checkered flag at Daytona and California, but a blown engine ruined his chances just seven laps in. Logano finished 13th here in his first trip to Vegas last year, and that was as a wide-eyed rookie. Logano has a year under his belt and his coming off a fifth-place run at California last week, two spots ahead of Kenseth.

Burton is the safe play here at +1500, and he was catching up to Johnson last week before Harvick got in the mix. Burton has a good track record here, and is one of just four drivers to have raced in all 12 of the races held here.

Posted by Egypt Conflict at 5:58 PM