NBA Betting – Any chance of an upset in Boston on Saturday? 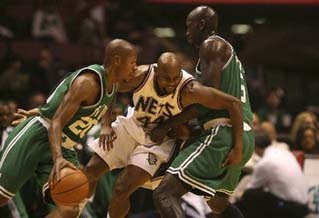 Sports betting players have been wagering on whether New Jersey will get to 10 wins this year, and right now, it’s looking like it will be close for the sad-sack Nets, who will face an uphill climb when they head to Boston on Saturday afternoon for a meeting with the Celtics.

The Nets have lost four in a row since a rare win, at Charlotte of all places, and the Bobcats are one of the best home teams in the league, so anything is possible, to quote Kevin Garnett. The Nets fought hard to make it interesting in a 102-93 loss at home to Portland on Tuesday, and that’s one thing that you have to give New Jersey, is that they aren’t just rolling over and letting teams rout them. They are out there trying in what has been a very tough season. Courtney Lee and Devin Harris had 28 points for the Nets, and they also got 17 points and 10 boards from Brook Lopez, but no one else scored more than six points, and New Jersey allowed Portland to shoot 54.1% from the field.

The Celtics will first face Cleveland at home on Thursday, and they could be without Paul Pierce for that game as “The Truth” hurt his thumb last week against the Lakers. They didn’t need him in a 110-106 win over New York on Tuesday in the debut of Nate Robinson, suiting up against his former team after missing three games with the flu. Robinson scored four points in 16 minutes of action for the Celtics, who were led by Ray Allen’s 24 points and a big block late in the game. Allen had been averaging 21.8 points in his last five games ahead of the Cleveland game, and he looks more relaxed now that all of the trade talk that surrounded him is over. Allen is out to prove that he can still be productive on a playoff team, and he’ll get more shots with Pierce out.

You’d probably get better odds in a super casino than you would get for the Nets to win in Boston, where they’ve lost five in a row. Overall, the Celtics have won a whopping 12 straight over the Nets, including three games this year. Allen has averaged 17.7 points against the Nets this year, while Lopez has put up 20.0 points, and the Nets actually played the Celtics tough in a 96-87 loss in Boston on February 5th, powered by 26 points from Allen. The Nets just have no idea how to win this year, and the Celtics will have enough in the tank, even without Pierce.

Posted by Egypt Conflict at 5:22 PM