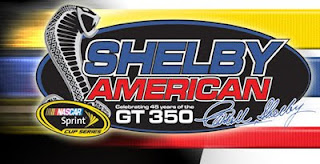 NASCAR betting players have been waiting for a team to step up and consistently challenge Hendrick Motorsports, and over the first two weeks of the season, it looks like Richard Childress Racing is ready to step up after a terrible 2009 season. The Shelby American takes place this Sunday at Las Vegas, and one of their drivers will end a 43-race winless streak at a place he’s already won twice.

Last week’s winner at California won this race three times from 2005 to 2007, and he probably would have won last year if not for wall contact late in the race which dropped him back into the pack.

Last year’s winner took the checkered flag from the pole, setting a track record in the process, but an engine change made him go to the back of the pack at the start. But Busch was determined to win at his hometown track, and he pulled out the victory. Busch seems more mature so far this year, as he got engaged, and he owns his own truck team. Last week, his car was terrible, but he willed it to a 14th-place finish.

Burton won this race in 1999 and 2000, and bookmakers (sportsbook reviews) may have issues putting faith in the No.31 driver as he hasn’t won since October 2008, which was the second Charlotte race of the year. Burton’s 9.8 average is the best finishing average among active drivers, and he’s one of four racers (Mark Martin, Jeff Gordon and Bobby Labonte are the others) to have driven in all 12 Las Vegas races. Burton finished third behind Johnson and RCR teammate Kevin Harvick at California last week.

The No.17 driver switched crew chiefs after just one race, but he got a seventh-place finish out of California as the defending champion after no one heard anything from him all day long. Kenseth won this race in 2003 and 2004, and he was going for three wins in a row last year before a blown engine sent him to the garage in just the seventh lap.

This is the guy you want to back if you like risks, and the No.20 driver finished 13th here in his first Las Vegas race last year. Logano finished fifth last week at California, and he carries himself with a confidence he didn’t have last year as a rookie. He could win a couple of races this season, and it wouldn’t be a surprise.

Pick: Jeff Burton is the play here after his performances in the first couple of weeks. He’s my sports handicapping pick of the weekend.

Posted by Egypt Conflict at 5:40 PM