Financings of the Fortnight Needs a Haircut 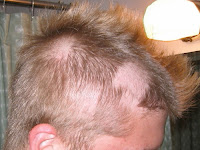 The first time we used this awful image to the right was about three years ago, when seemingly well-positioned biotechs destined for snazzy IPOs were running into a wall of scissors and electric razors wielded by public investors.

It turns out that in most cases their arguments that biotech offerings were overpriced were pretty accurate, if you consider how those biotechs that went public during the 2005-2008 timeframe have performed in the market.

We presented the data below (click image to enlarge) at our Pharmaceutical Strategic Outlook meeting this week in New York. An investment in the collective IPOs from 2005-2008 would have returned only 6% as of this Tuesday. Keeping in mind the market value performance illustrated in this chart comes after the steep discounts demanded by public investors, it's an ugly picture indeed. The success stories (among which we'd include Pharmasset, the subject of that 2007 post) are few and far between. In addition to the companies represented by the bars below, eleven were acquired, but the vast majority of those deals were done at valuations well below where companies were when they IPO'd. 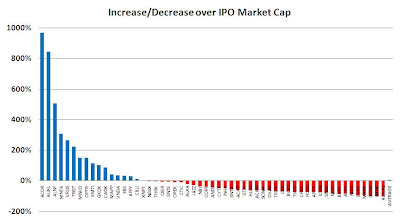 Which brings us around to this week's non-debut of Anthera, a closely watched pricing event that wasn't. Anthera was due to raise up to $64 million by selling shares to the public at $13-15 per. That offering was postponed on Wednesday, while investors chewed over a new $8-9 per share price tag that could raise $54 million for the company.

It didn't take long for Anthera to trim that price yet again. Today an amended filing says the biotech will raise up to $42 million by selling shares at $7 apiece. For those of you keeping score at home that's a 50% haircut from the midpoint of its initial range.

Anthera is being watched closely as a barometer for investor interest in biotech IPOs. It's not hard to see that interest isn't exactly rabid.

Eleven Biotherapeutics: This me-better biologics play raised $35 million in a Series A round led by Flagship Ventures and Third Rock Ventures on Feb. 17. Asked to describe whether this was the entirety of the Series A of if more was to come, CEO David St. Hubbins* replied* "Well, I don't really think that the end can be assessed as of itself as being the end because what does the end feel like? It's like saying when you try to extrapolate the end of the universe, you say, if the universe is indeed infinite, then how - what does that mean? How far is all the way, and then if it stops, what's stopping it, and what's behind what's stopping it? So, what's the end, you know, is my question to you." (*For a more accurate version of what Eleven's management actually said, check out this piece in "The Pink Sheet" DAILY.)--CM

Labopharm: Just two months after agreeing to a $25 million standby equity distribution agreement with Yorkville Advisors, this Laval, Quebec, firm took a more conventional route to fundraising, closing a follow-on public offering Feb. 18 that including the overallotment netted $21.6 million. Labopharm, which specializes controlled-release technologies will use the funds largely to prepare for launch of its second US product, Oleptro, a once-daily formulation of trazodone approved by FDA for major depressive disorder on Feb. 3. The company has said it is opening to licensing out the drug or doing some form of co-promotion, and that its FOPO cash would support those efforts as well as launch. Like many FOPOs of recent months, Labopharm’s deal is somewhat warrant-heavy. It sold 13.5 million shares at $1.70 per unit, with each unit comprising a full share and a warrant for half a share. During a 30-month period beginning six months from closing, warrant holders can redeem their warrants for up to 5.9 million additional shares in Labopharm, at $2.30 per share.--Joseph Haas

Tioga Pharmaceuticals: Just over four years after pulling in $24 million via its Series A financing, GI drug player Tioga Pharmaceuticals completed its Series B round on February 17, raising $18 million from new investor Genesys Capital Partners, which participated with previous backers Forward Ventures, New Leaf Ventures, and BB Biotech Ventures. Tioga is placing all bets on asimadoline, an oral selective kappa opioid agonist it obtained when it spun out of Merck KGAA in 2005. The European pharma had been developing the candidate for musculoskeletal pain, but it failed to show efficacy in early studies. Merck eventually saw more potential in treating the visceral pain and bowel motility associated with IBS and as part of a reorganization to focus on cancer and cardiometabolic diseases, sold the asset to Tioga (for more history on Tioga, see our START-UP profile). Since asimadoline had been extensively tested in the past, Tioga had an advantage that other start-ups typically don’t have, which is to almost immediately start a large-scale efficacy trial, and at a much lower cost. The Series B money will support a US Phase III trial--one of two registration trials needed to get the drug approved in the US—slated to begin in March in 600 patients with diarrhea-predominant IBS. Perhaps Tioga is following in the footsteps of Movetis, another GI-focused company that began operations with discarded large pharma GI assets; and that wouldn’t be such a bad thing–Movetis has managed to bring its chronic constipation drug Resolor to the market in Europe. It also pulled off a successful IPO this past December and is still trading above its IPO price.--Amanda Micklus

Posted by Egypt Conflict at 9:30 AM