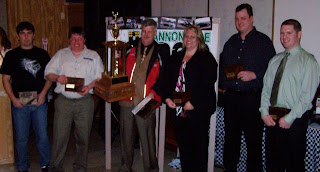 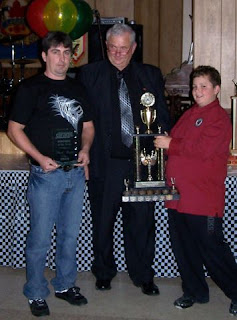 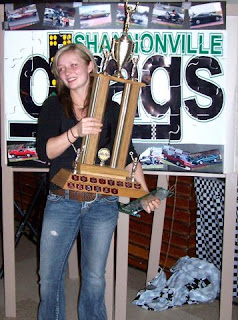 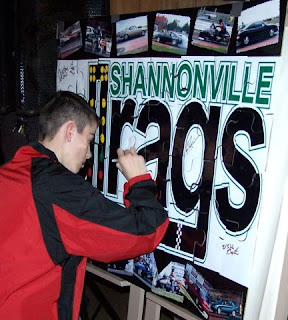 Most of what they’ll do on a race weekend can be decided in the blink of an eye.  More often than not, a fraction of a second will make the difference between going fast and going home.  It would be easy to excuse the drag series racers from Shannonville Motorsport Park for getting a little anxious at the thought of being forced to sit still for a long period of time, but when they gathered to accept the awards and point fund payouts from the 2009 season – Saturday, February 20th – at the Belleville Legion, that’s exactly what happened.

Like many other motorsports facilities and sanctioning bodies, Shannonville’s straight line standouts saw parts of their ’09 season affected by the weather.  Rain was a factor that forced delays or cancellation of events throughout the year.  Following a buffet meal and the distribution of door prizes, the final bit of housekeeping before the hardware was passed-out was to announce that the 2010 campaign would begin the weekend of April 17th and 18th.

‘Family atmosphere’ was a theme that was repeated many times during the evening as the top runners in each division were recognized for their efforts.  Brandon Barker – acknowledged at an earlier ceremony – was introduced to the capacity crowd as the track’s 3 time junior dragster champion.  The street racers were next on the agenda, with a top 5 of Jim Benvie, Nathan Mutch, Brad Parks, Gordon Raison and class champion William Barter earning their time in the spotlight.  For Barter, it was his 3rd championship in the last 4 years.

To close out the evening, super pro runner Mark Boyer was named the winner of the Bruce Douglas rookie of the year award, while pro division point champion Jess Tandy continued the ‘family’ theme by having her name engraved on the Larry Tandy driver of the year trophy.

The night’s festivities concluded with the local band Growing Pains providing the entertainment as the award winners, their families and friends gathered for photographs with the fruits of their labours.  With the 2010 season just a couple of months away, an air of optimism was felt all through the capacity crowd.  Hope for a boost in the economy, increased car counts in each class and a year that is rain free.

#3).  After earning her Pro division title in 4 years, Jess Tandy was also awarded with the Larry Tandy driver of the year award.

#4).  At the start of the night, drivers were given odd and even numbered envelopes containing puzzle pieces.  To close the evening, they were given markers and asked to sign the finished version.

Posted by Egypt Conflict at 8:21 AM