City Ready For Round 2 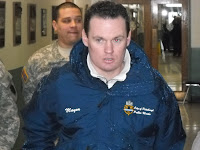 Pittsburgh Mayor Luke Ravenstahl says city crews were not able to make it to all side streets before the second snowstorm entered the area. Ravenstahl had set a goal of clearing every street of ice and snow before having to return to treating the main roads. This time though, the mayor has 20 private companies under contract to provide 50 pieces of snow removal equipment to work on city streets. He says city plows will also not have to be called away from their prescribed routes to deal with emergencies. Ravenstahl says all public safety vehicles have been equipped with tire chains and snow shovels and, “They are responsible for getting their vehicles cleared if they get stuck.” National guard troops in Humvees have been called in to help deal with resident’s needs. Calls that come into the 311 center asking for help in getting to medical appointments or help picking up medications will be answered by those units. Ravenstahl says several residents were taken to dialysis today in National Guard vehicles. The numbers of lines ringing into the city’s 311 center has been boosted from the normal 8 to 12 and the mayor hopes to up that number to 16 soon. Ravenstahl is asking that residents not use the 311 line to report that their street has not been plowed, “We know what streets have not been hit yet. What we need to clear the 311 line for is those that need medical assistance.” Ravenstahl says he understands that people are frustrated and admits that he is frustrated too, but he is asking for people to remain calm. The city is also asking the state to help pick up some main arteries. The city is normally responsible for snow removal on a list of state roads that pass through the city but Ravenstahl is asking that when Penn Dot plows hit the city line they keep right on rolling. Ravenstahl says he knows the city does not have enough equipment to handle a 21-inch snowfall but he thinks it does have enough equipment to deal with a more typical 3-4 inch storm. He says equipment needs will be assessed when the emergency has passed. All city fire fighters have been called into work and police are working 12-hour shifts. The mayor says it is a precautionary move because, “we don’t know what the next 24 or 48 hours will bring.”
Posted by Egypt Conflict at 2:00 PM

Email ThisBlogThis!Share to TwitterShare to FacebookShare to Pinterest
Labels: weather