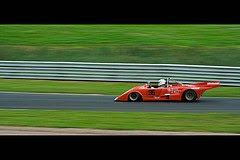 You have to feel sorry for biopharma R&D chiefs these days. As cash flow and profit-and-loss sparing efforts become de rigueur, it sure seems like the CFOs are in the drivers' seats with the R&D heads strapped into the passenger seat along for a very bumpy ride.

There's no question folks like Pfizer's wonder twin powers, Martin McKay and Mikael Dolsten, and GSK's Moncef Slaoui are being asked to do more with a shrinking R&D pool. AstraZeneca, too, is rethinking its R&D approach, putting greater emphasis on externalization thanks to a restructuring to create 8 innovative medicine units (or I-Meds, a very Apple-like parlance).

To be fair, when a company like Pfizer announces its winnowing its R&D budget from $11 billion to $8 billion, there's still some serious cash going to internal programs. But it's an interesting example of cognitive dissonance when R&D heads admit "yep, we're all about innovation AND we're shrinking R&D."

Thus, it was practically shocking to hear a public mid-sized company--European no less--vocally declaim its intention to plow signficant cash resources back into its R&D efforts on the same day that GSK offered more clarity on coming pink slips.

The company revving it's R&D engine? Dutch vaccine maker Crucell, who reported on its Feb. 9 year-end earnings call cash and short-term liquidities of about €428 million. Given the company's laden coffers (continued strong operating cash flow in CFO-speak), Crucell's CFO Leo Kruimer told investors: "We've made a conscious decision to increase R&D spending and development spending especially by as much as one-third vis-à-vis this year, while we maintain a very healthy operating profit."

Say WHAAAT? You mean there's no dividend? (Maybe that's the reason the stock was off even after the company reported better than expected numbers.)

Crucell, unlike many other biopharmas, has had a very good year. For starters, vaccines are a hot commodity as nearly every big pharma sees the importance of diversifying into this arena. Crucell has leveraged the interest into a number of lucrative partnerships, including a $70 million contract with NIAID/NIH to develop infectious disease vaccines, and the big kahuna, an alliance with Johnson & Johnson in September 2009 that included an 18% equity stake worth $443.5 million for Crucell.

Indeed, it's the partnership with J&J--now undeniably Crucell's big brother--that has removed the quarterly earnings pressure (at least for a little bit), allowing more resources to flow to R&D. Calling the balance sheet "magnificent" Crucell CEO Ronald Brus said, "With the right investments and the right people we should be able to do things quicker...and why we did invest a lot in new leadership in that R&D arena." (For those keeping count, Crucell increased R&D personnel by 120 in '09.)

But it likely won't be just internal R&D that benefits from the cash. Most analysts predict Crucell will bolster capabilities via acquisitions (sound familiar?) as it tries to out-gun competitors such as Panacea Biotech and Shantha Biotechnics.

Brus dodged a direct question on the matter from Needham analyst Alan Carr, averring,"We're not looking for acquisitions to fill our pipeline because I think our pipeline has never been as full as it is today." Instead the focus will be on deals that "could significantly improve revenues and profit of the longer run."

In a follow-up interview with Reuters, Brus clarified Crucell's current thinking. "If we would make an acquisition, it would be of a profitable product or products that are very close to being launched on the market rather than a pipeline product," he said.

It will be interesting to keep tabs on Crucell in the coming months, especially if future deals vault the biotech into Big Pharma's realm of must-have acquisition targets. The great irony, of course, being that much of Crucell's new found vigor is a direct result from being left at the M&A altar in early 2009.

Till then, you science types looking for new digs? Try Crucell, who's apparently not afraid to burn some R&D rubber.


(Image courtesy of flickrer shyha used with permission through a creative commons license.)
Posted by Egypt Conflict at 4:00 AM