Outpouring of Reaction to Murth's Death 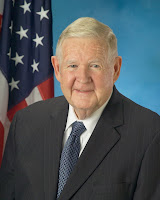 The outpouring of grief and remembrances continues following the death of Congressman John Murtha of Johnstown. The 77-year-old Democrat died yesterday while being treated for complications from gallbladder surgery. Cambria County Democrat Committee Chair Helen Whiteford says she was shocked by Murtha’s death and he will be missed not only by Johnstown but also by the entire district. She praised Murtha for his ability to bring money back to the region. Whiteford worked on Murtha’s first campaign in 1974. Last Saturday Murtha became the longest serving member of congress from Pennsylvania. She says over the years he has weathered many attacks and has come through each one of them. She predicts he would have done the same with recent allegations of misconduct over sending defense contracts to friends and family members.

Pennsylvania Democratic Party Chair T.J Rooney says he was shocked and surprised when he learned of the death of John Murtha. He says he had just been told over the weekend that he was “on the mend.” Rooney says Murtha was a “legislative titan” and the best there ever was at bringing money back to his district. Rooney praised Murtha for being the “epitome of a gentleman.” He says Murtha could go toe to toe with you over a piece of legislation during the day and then break bread with you at night. He says that is becoming increasingly rare in politics. Rooney says, “this is not just a loss for Johnstown; this is a loss for all of Pennsylvania.”

State Senator John Wozniak of Cambria County says the death of Congressman John Murtha comes as a terrible shock. He says, ”He was a very good friend, a mentor, I’ve known him since I was in high school.” Wozniak says he, “can’t imagine a world without the Congressman,” and all of what he’s done for the people of Western Pennsylvania, the state and the nation. Wozniak says that when the steel industry began to decline, Murtha went to work to help diversify the economy and bring jobs and investment to the region in infrastructure and the private sector. Wozniak says no member of Congress or the Senate more on the side of the soldier to make sure they have what they need on the battlefield.

PA Governor Ed Rendell:
"Pennsylvania has lost one of its greatest citizens. Congressman Murtha impacted the entire state, not just his congressional district, in ways that almost no individual has. He was also the best friend and supporter of our military and the men and women who risk their lives for our country. He worked tirelessly to ensure that our military had the resources it needed to do its job effectively. The governor Rendell ordered all Pennsylvania and U.S. flags across the commonwealth to be flown at half-staff through interment.

U.S. Senator Arlen Specter:
“I am deeply saddened to lose my dear friend and colleague Jack Murtha. He was a public servant in every sense of the word and his passing is a great loss to all of Pennsylvania. Joan and my thoughts are with his wife, Joyce, and their children.”

Allegheny County Executive Dan Onorato:
“Congressman Murtha was tremendously dedicated to his constituents, and he always fought for them and for what he believed in. His service to our country on the battlefield and in the U.S. House of Representatives was truly inspiring. Our Commonwealth has lost a great man and a great public servant. He will be deeply missed.”

Congressman Chaka Fattah of Philadelphia:
"Chairman Murtha will be remembered as a man who was not just Congressman from Johnstown, he was the Congressman for Philadelphia, the Congressman for Pittsburgh, for Allentown, for every corner of our Commonwealth. He really carried the weight of Pennsylvania on his shoulders. In Congress, he always sat in the same chair and he always had the same disposition: Pennsylvania first. Congressman Murtha, I believe, will be best remembered as the first serious hawk to stand up and call for our withdrawal from Iraq. As a former Marine - he would say 'always a Marine' - Jack Murtha's courageous stand marked a turning point in America's involvement in that ill-advised war.”

William Russell, Republican Candidate for the 12th Dist:
“While Mr. Murtha and I were political combatants in every sense, our family and campaign team asks you to keep the Murtha family in your thoughts and prayers. Regardless of your political position, you always knew Jack had an immense love and loyalty to his family and the residents of the 12th Congressional District.”
Posted by Egypt Conflict at 3:48 AM