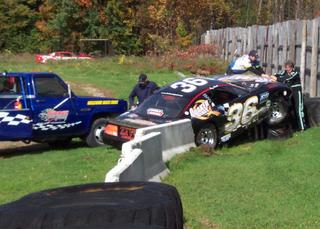 Series Race #23 - Flamboro Speedway - October 2nd
The Oktoberfest Show was filled with excitement. It would be Gary’s first ever 100 lap race bringing with it some of Ontario’s best Late Model drivers. Qualifying was done on Saturday October 1st.

A record 32 cars battled for 24 spots. A 2nd in the heat qualified him 6th. David won the heat, picking up his 8th win of the season. An invert of 16 put Gary 11th in the line up. The start of the race was very tight with many fast cars. Moving to the outside the Quaker State Dodge soon got into 7th place and followed ALSTAR Champ Kirk Hooker. A caution on lap 11 provided the opportunity to get by the 6th place car of #22 Glen Watson.

For the next 10 laps Gary glued his car to the back of Hookers #38. Another caution came when 5th place runner Larry Jackson spun out. Gary moved to 5th and would restart beside the #38 to lead the outside lane. Also moving quickly through the pack was David coming from 14th to 7th. On the restart Gary moved the black Dodge past 4th to the rear of 3rd place runner #30 Jim Molehuis another ALSTAR veteran.

The challenge of running the outside lane with these quick cars didn’t discourage the Rookie although these seasoned Late Model vets were anything but passive. Coming off turn 2 the pack of cars headed for turn 3 with Gary beside Kirk and David on dads bumper. Suddenly Kirk moved his car into the high lane hitting the Quaker State car. Gary slowed to avoid the wall but the decrease in speed was too quick for David to react and he slammed the black Dodge knocking into the lower lane where a chain reaction developed causing chaos and mayhem. Gary was hit hard and driven back into the high lane where he collected David. Unfortunately the only 2 cars wrecked were the father and son team.

Later Kirk Hooker would apologize claiming that he didn’t see Gary. A handshake settled the issue. Both returned to the race many laps down. Gary finished 17th and David 18th.

Series Race #24 - Peterborough Speedway - October 9th
With WWS points on the line and the possibility of losing 3rd, Gary and his team hoped their debut at Peterborough would be a success. The car was prepared during the week with Flamboro’s wounds repaired. What the team wanted was to finish the season with a good performance. What happened was incredibly bizarre.

During hot laps with the Quaker Sate Dodge turning excellent times, another car on the track was black-flagged. The driver was suppose to take his car to the infield until practice was over, but instead stopped at the end of the front chute, in the fast lane to turn into the pits. Unfortunately, Gary came flying past the starter stand with 2 other cars on the low lane. The only choices were to slam into the back of the stopped car or go around the outside. Passing high at full speed Gary slid through the opening in turn one and head on into the cement barriers and huge tires. The car went air born landing on top of the tires.

Gary was unhurt but the car suffered serious suspension damage. The crew worked hard (along with the driver who stopped on the track) to get the car ready for the heats. Though race ready, it would not be the same car prior to the accident. On Sunday Gary started 16th but parked the car after two right rear flats. Gary made enough points to finish 3rd in the WWS series. David meanwhile won the WWS Late Model Championship by 3 points his first Late Model title.