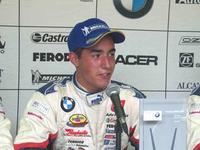 St-Eustache, Québec, October 14. – After completing his season in Formula BMW USA, young driver Kevin Lacroix took some time with his team to brush up a picture of the first year of his road racing career. The 16-year old young man is really proud of his first season and draws many positive conclusions. One thing is obvious in his mind: he has come a long way from the kid who was driving karts just a year ago.

“When I realize what happened to me over the span of one year, says Lacroix, I have to admit this season was a tremendous learning curve and no other series could have done better for me. The BMW series is meant for young drivers coming out of karting. The FB2 machine is swift and nervous, similar to the small machines I drove for nine years before reaching the big tracks.”

From karting to road racing
It all started last year when Kevin was invited to both BMW training camps in Valencia, Spain. He continues: “We are supervised by professional instructors whether we’re on the track or attending classes. We get familiar with the car, we learn how to behave on the track, etc” After these camps, Kevin was awarded a 40,000$ scholarship and was tutored for the rest of the season. “We were sent to the NASA training center for a physical evaluation. You learn early that you physical fitness is very important when you race. The you realize again how serious those people are: over the course of a race season, I learned more than all my karting years put together. No other series could have done as much. I strongly recommend all newcomers to road racing to start with the BMW.”

Four victories and great events
He totaled four victories this season, the highest by any driver, and a few more podiums. “I was pretty impressed to race on such grand prix tracks like Indianapolis and Montreal, my hometown. Some other tracks were also fantastic racing venues. Each of the seven double headers was a new challenge. Besides the races, we also met great people.”

Special thanks
Kevin had some kind words for the people around him. “I want to thank the series officials who were very professional. Also AIM Motorsport and Keith Willis for their work at the races. Hats off to my engineer Yvan Turcotte who the tireless hours he spent preparing the UniSelect #22 car. And also my manager Richard Galarneau. Finally, the season would not have been possible without my sponsors. They have been very supportive over the last four years and I feel committed to them.”

Where the future lies
The team around Kevin Lacroix is presently considering different avenues for 2006. “We have a few offers from European Formula 3 teams but our goal right now is the new Formula Atlantic series. With a new chassis and engine, all teams will start from scratch with no data: this will benefit a young man like me who would start fresh with new package like all the others. Furthermore, the mother series will apply a two million dollar prize money for the champion when he enters Champ Car.

Testing to come
The Lacroix team is working on a testing schedule in the coming weeks. “We want to test with the former 014a model: it is very competitive and most of the teams will test with it. The new package won’t be available before Spring. The best way to keep posted about what will happen to me in the future is to pay a little visit to my web site.”

Named the Rising Star among kart drivers in 2004, Kevin Lacroix was a 2005 Formula BMW USA scholar, the best entry level professional racing series in America, Europe and Asia. He took part in Formula BMW USA in 2005 with the support of sponsors that have trusted him for many years: Uni-Select network, SKF MotorSports, Raybestos, Tenneco, Pennzoil, Auto Parts Plus and Lacroix Auto Parts. His web site can be visited at www.kevinlacroix.com.
Posted by Egypt Conflict at 10:59 AM