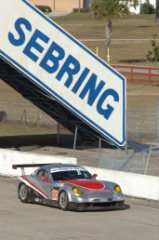 David Brabham will join Scott Maxwell in the No. 50 Panoz Esperante from Multimatic Motorsports Team Panoz for the full 10-race schedule.

The team also confirmed that it will compete on Pirelli rubber for this season, continuing a two-year relationship that began in 2004 with Panoz Motor Sports. Using Pirelli last season, the Esperante won in GT2 at the Grand Prix of Atlanta, helping Pirelli finish second in the 2005 class tire manufacturers championship.

"This already has been a terrific week for us," said Larry Holt, Multimatic vice president and team technical director. "We are pleased with how the car has performed over the first two days, thanks in large part to the support we are getting from Pirelli, who we're thrilled to be working with again for 2006.

"Then adding a driver as talented as David gives us even more reason to be thoroughly optimistic for this season," Holt added. "He has a long history of success with the Panoz LMP1 projects, and he's no stranger to Multimatic and Scott, either."

Brabham is one of the American Le Mans Series' most successful drivers with 11 career victories. He has made 52 career starts (good for fifth in Series history), has 29 podiums, 40 top fives and 49 top 10s. Most of his success came with the Panoz factory team in the early days of the Series with its LMP1 offerings.

"It's fantastic to be back in a Panoz car as some of my fondest racing memories are from the time I spent in the LMP car," Brabham said.

Pirelli and Multimatic Motorsports Team Panoz are renewing a relationship that saw them post an LMP2 victory at Le Mans in 2000.

"Having the cars run by Multimatic also is great as it is a world class team and I won a Rolex watch with them in 2003. I'll be partnered with Scott again, who has become a good friend over the years. It should be a competitive and enjoyable year."

Brabham also has driven for Prodrive in the American Le Mans Series on two different occasions. In 2003, he drove Prodrive's Ferrari 550 in seven events and won three times. Last year he was the lead driver in Aston Martin's return to sports car racing with its DBR9. Brabham was part of the winning team in GT1 at the Mobil 1 Twelve Hours of Sebring, and he also competed at Petit Le Mans and the Monterey Sports Car Championships to close the 2005 season.

"I always have taken great pleasure in competing in the American Le Mans Series," Brabham said. "Returning full-time has been a goal of mine for a couple of years, and to do it with Multimatic Motorsports Team Panoz is a great feeling."

Multimatic also plans to finalize its driver lineup for the full season and Mobil 1 Twelve Hours of Sebring by the end of this week.
Posted by Egypt Conflict at 11:03 AM