Kaká to a Passage from Real Madrid, but Chelsea Came in the Negotiation 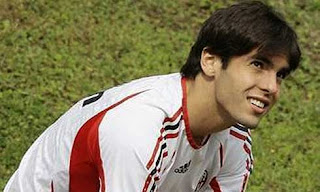 Milan and Real Madrid were about to sign on Tuesday an agreement for the transfer of Kaka, according to match the Italian and Spanish press.

However, the Gazzetta dello Sport reported that at the eleventh hour came into the Chelsea scene, so the transfer would have been so far in the air.

When the negotiation was already terminated unexpectedly came on the scene Carlo Ancelotti, Kaka last technician in Milan, who have expressed interest in Chelsea, reviewed the paper.

The Brazilian player, who is in Milan since 2003, was one step away from Real Madrid and willing to sign a contract for nine million euros net per season (12.8 million dollars) for five years, according to the same source.

Adriano Galliani, vice-president of Milan, is in Madrid with his father and representative of Kaká, Bosco Leite, and both met with the new Madrid president, Florentino Perez, to discuss the transfer of Brazilian driving, as reported by Spanish newspaper Marca and As and Ser radio

According to Spanish newspapers, Madrid paid 65 million euros (93 million dollars) for the transfer.

Galliani, when consulted by telephone by the sports newspaper of Milan, first denied that he was in Madrid, and later acknowledged that he had gone because I was invited to dinner by my friend in Madrid Florentino (Perez) on his election as president of the Real.

Madrid's sports director Jorge Valdano said on Tuesday during the presentation of the new coach Manuel Pellegrini merengue team that negotiates a significant signing, but refused to give details.

Milan owner, Silvio Berlusconi, acknowledged that I do not know if we can offer to Kaka because so much money.

Chased by Italian journalists, even on the plane that was worn back to Brazil, Kaká is to be reiterated that in Milan.

However, the club does not give any assurance that it can resist the siren songs of the Real Madrid and Pérez, bent on reviving the laurels of the age of the galactic.

I say last, last, I do not want to go from Milan, but please, at this point I prefer to be quiet because I do not want to be misinterpreted, "said the Brazilian star, according to an interview published Tuesday by the Gazzetta dello Sport to him on an airplane.

To the millions of tifosi Rossoneri I say that my decision and I have taken, I said I want to stay quiet let me now, please, said when he traveled with his son and his wife.

The newspaper noted that Italian Kaka insists on me I want to stay, as if not sure of the decision of Milan before that the millionaire would have made the offer Madrid.

Galliani, who had claimed in the past that the Brazilian player will not move, now merely to say that try to resist the offensive of Madrid.

Paolo Maldini, Milan legend who played his last game last weekend, was not quite sure about the future of Kaka: I think we will stay at Milan, but it's hard to say because their future has been even more airtight that Ancelotti.

It is not easy to know who will, but if you go, the Milan should hire another champion because he won only the champions, said Maldini.

Posted by Egypt Conflict at 4:24 PM