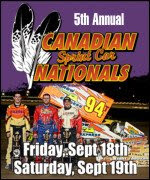 It seems hard to believe but the fifth edition of the "Canadian Sprint Car Nationals" presented by Arrow Express is scheduled to take place at the Styres family owned three-eight mile clay oval just outside Brantford, Ontario on Saturday, September 19. Ohsweken Speedway has undergone expansive transformation since the inaugural event took place in 2005 when Kenny Jacobs in a Mike Woodring car emerged as the winner. As pre entries open and begin to file in, early indications are encouraging as five regional sanctioning groups have once again cast their support behind the fall "must see" event. The Alberta sprint car scene also expects representation as Gord Kynoch has indicated he has the date circled on his sprint car racing calendar.

And the sponsorship package continues to grow as a recent agreement  with Inside Track Motorsport News has offered up a substantial cash award to the highest finishing Canadian in the 30 lap main event Saturday night.

In conjunction with the "Arrow Express – Canadian Sprint Car Nationals" running on September 19, "Village Pizza; Village Café; and Sit-N-Bull Construction" will host "The Night Before the Nationals" on Friday, September 18. The Friday portion of the weekend will feature the fifth running of the "Village Pizza – Ohsweken Shootout" along with a pair of 15 lap "A" Main's that will guarantee the winners a position in the Saturday feature starting grid. The Dave MacLeod Memorial "Mr. Sprint Car" Challenge will also be contested with the winner set to collect a cool $1,000 in the elimination style event. Also on the card will be a full program of Mini Stocks, Thunder Stocks and Bombers with a series of sprint heats lined up by a random draw.

The fifth annual "Arrow Express - Canadian Sprint Car Nationals" will retain a one day format that has been so successful since it's inception.. Time trials will once again set the starting line-ups for the heat races with six cars being inverted in each heat. The winners of the heats will transfer directly to the "A" Main and be lined up according to their time trial results in inverted order. Three "B" Mains will then be run and a non-Qualifier "Little Feature" will be utilized to complete the 28 car starting field. In keeping with the initial goal of adding to the purse each year and building the event into the premier sprint car race in the north-east, the "A" Main winner will collect $9,000 for their efforts, up from $5,000 in inaugural event with the final position collecting $650. Again in 2009, all prize money will be paid out in U.S. currency. The Saturday show will see the Mod Lite Championship Tour North join the program this year as the support class.

And to add to the fall extravaganza, the Empire Super Sprints will return on Thursday, September 17 to make up the program that fell to rain on May 29. With many competitors expected over the weekend and the open draw format now used by ESS, the field promises to be the largest of the season for an ESS sanction program.

Don't delay - make your plans now to join us at Ohsweken Speedway on September 17, 18 & 19, 2009 for the "Arrow Express - Canadian Sprint Car Nationals" weekend. Advanced Reserved Seat tickets are now on sale at 1-888-720-7223. Be sure to watch for more race information and sponsorship news as plans are finalized.  Log on to the official website of Ohsweken Speedway at www.ohswekenspeedway.com and click on the "Canadian Sprint Car Nationals" ad on the left side of the home page for rules and entry forms.

Posted by Egypt Conflict at 5:35 AM