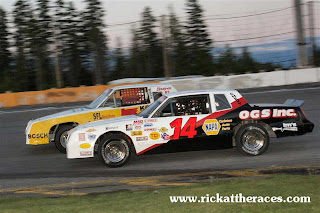 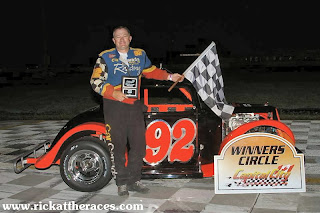 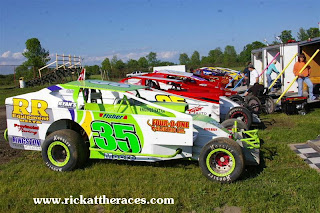 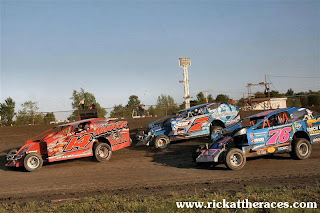 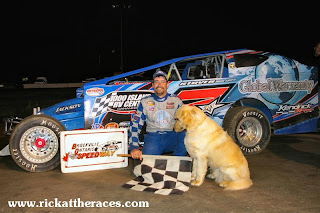 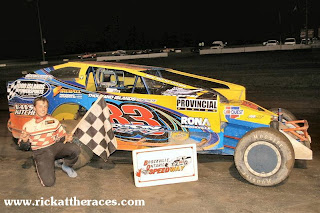 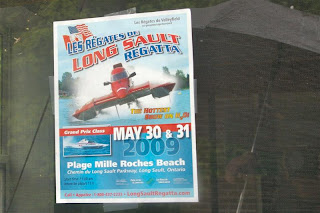 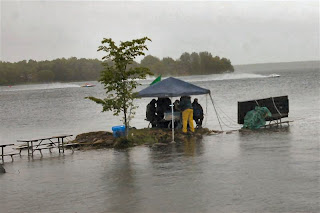 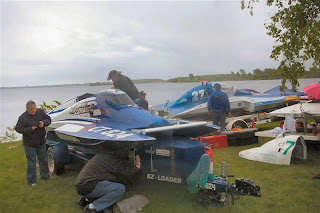 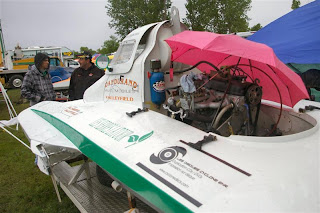 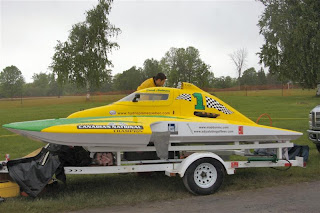 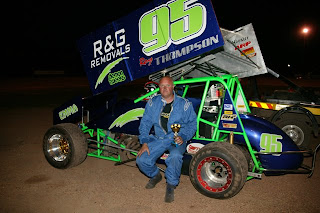 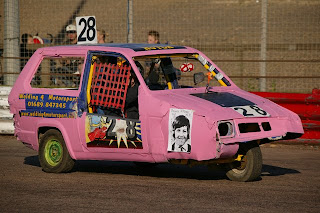 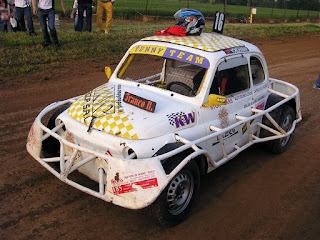 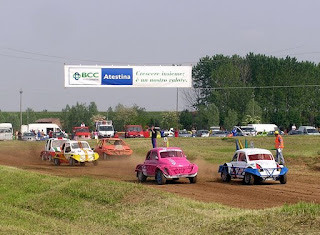 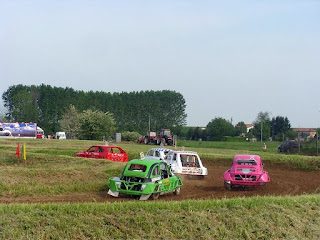 After many Fridays of finishing work late, I finally got lucky this past weekend and was all done by 2-00pm. It had been raining all of the week and much of Friday was the same until lunchtime when it stopped. Finishing this early gave me time to return home and check on the status of all my local tracks before setting off for the races.

The websites for Autodrome Edelweiss ( Cantley, Que) and the Can Am Speedway (Lafargeville NY) had already got cancellation notices and a phone call to my buddy Mike Watts , the MIR track photographer confirmed the same for Mohawk International Raceway's ( Hogansburg NY) season opener. Hopes were still positive, of getting the show in, at my intended destination of the Capital City Speedway (Ottawa, Ont) so that's where I headed.

Being a paved track, it had the advantage over dirt surfaces by drying quicker. The rain that had fallen in Stittsville earlier in afternoon had now dried out on the asphalt, and providing there was no more to come, we were in business to go racing. Of course the recent diabolical weather and the doubt in peoples minds kept crowd numbers down, but the car count was only slightly effected. Just on cue , as the first heat took to the track the cloudy skies dissapeared and a strange yellow thing appeared on the horizon ( I believe it was called 'the sun')

The Late Models were taking a night off and the Legends took star billing. Their feature turned out to be one of the best races, I've seen anywhere this year. The top three guys, Dave Riopelle, Chad Windsor and Kevin Foisy had a race-long battle up front with Riopelle hanging on to take the checkers.

Saturday was a rain-free day in my area and I was looking forward to visiting the Brockville Ontario Speedway. The weather stayed dry and a good field of Dirt Modifieds and Sportsman lined the pits. Numbers were boosted by the rained-out races at Autodrome Drummond in Quebec. Once again Kingston's Danny O'Brien showed that he's the man to beat after overhauling Todd Stewart and Kyle Dingwall in the Modified feature.

Young Dylan Evoy took the honors in the Sportsman feature, the first in his short career. Even though the night was dry, it was still a bit too chilly for my liking and I'm sure most people welcomed the earlier than normal finish to the program.

My plans to attend the Cornwall Motor Speedway on Sunday evening came to an abrupt halt soon after lunch when my area of the Seaway Valley received another liberal serving of H20. I live ten minutes away from the track and it was no surprise when I heard that the nights races had been canceled. With the decision being made early I had the chance to make other plans. There was plenty of time to get to the Devils Bowl Speedway in Vermont or the Cayuga County Fair Speedway New York, but with the 'iffy' weather everywhere I chose to stay local.

I live in Long Sault, Ontario which lies on the banks of the St Lawrence and this weekend our small town was hosting it's own racing event. Not for auto racing, but for Hydroplanes. The event was taking place at Mille Roches beach just a short drive from my home.

This is one type of event that can't be effected by wet weather !  so I decided to have my first taste of Hydroplane racing. I normally have no interest in any form of racing that doesn't run on wheels, but hey !  'any port in a storm' as the saying goes.

Five minutes after leaving home, I was on the Long Sault Parkway where Miles Roche Beach is located.

Let me digress for a moment... Mille Roches was one of the 'Lost Villages' of the St Lawrence. The Seaway project in the 1950's, which was a scheme to allow ocean going ships access to the Great Lakes and industrial cities like Chicago and Detroit claimed a whole community. Several villages had to be relocated when the land was purposely dammed and flooded. More about this project and the Lost Villages can be learned at www.lostvillages.ca

Back to the racing !

It was still raining when I arrived at the beach and as I looked out on the water the racing was already taking place. Most of the commentary was in French and I soon discovered that this event involved the same group of racers that compete in the annual Valleyfield (Quebec) Regatta. There were about half a dozen hydroplane's out on a course marked out with buoys. It was a bad day to take photos but in order to get some kind of visual record, I held my camera  beneath my umbrella !

After watching this race I wandered in to the 'pits' located further up the shore . There I found two large mobile construction cranes that were used to hoist the boats in and out of the water between races. There were quite a few assembled on the grassy banks which varied in size. I guess they are separated into divisions, much the same as we do in auto racing. I spoke to one guy who told me his was Toyota Corolla powered. This kind of thing was all new to me, but I imagine it's quite an enjoyable pass time on a sunny day.

While we in the North East  (Canada and the USA)  were bailing out under monsoon conditions, my friends in the UK were basking in a heat wave. My buddy Dave 'Smiffyman' Smith was at the Rolling Thunder Show at Arena Essex this weekend and sent me some photos. One of the pictures shows Roy Thompson one of the UK Sprint Car drivers I met up with during my winter racing tour of Florida. He along with promoter Vince O'Connor were in our 'gang' that shared the Parkway Hotel in Orlando.

Regular readers will know that I'm one of the 'minor- league' players in the world of TRACKCHASING. At the other end of the spectrum, there's Randy Lewis from San Clemente in Southern California (the worlds leading TRACKCHASER) who has visited over 1400 different race tracks. Randy sent me a report this week which grabbed my interest. He recently visited the Vighizzola d'Este Stock Car track in Italy.

After checking out the photos on his website www.ranlayracing.com I could not help having memories of some of the early Dutch racing I've witnessed. Instead of armored up VW beetle's like I saw in the Netherlands and Germany they were Italian Fiat 500's. The racing looks like a lot of fun and I wish I'd know about this track when I lived in Europe. The web site is  Www.stockcarcross.it

Unfortunately internet wasn't available back then and the information highway consisted of 'word of mouth' or by reading magazine articles.

I did visit Italy once in the 1980's during a family holiday to Antibes in the South of France. I remember us taking a day trip to Monaco, where I drove our Vauxhall Cavalier around the 'Casino Bend', part of the famous Grand Prix Circuit, before heading off to a nearby Italian beach in the afternoon. If there was one particular race I'd like to visit, it's the Monaco Grand Prix. I keep buying lottery tickets, so who knows one day it might happen!

Posted by Egypt Conflict at 6:40 AM