This, surely, is The One. Whether or not you agree with Jeff Kindler's strategy for Pfizer (plenty don't), the $68 billion Wyeth acquisition, announced on January 26, has to be the most obvious candidate for Big Pharma Deal of the Year.

Are we saying it's 2009's "most interesting and creative" deal making solution, in line with what these illustrious award nominations are supposedly rooting out? Creative, no. It was another, even-more-mega, mega-merger that cynics saw as a means to mitigate the impact of Lipitor's genericization. Solution? Too early to say. But what the deal perhaps lacked in creativity--at least, at first sight--it surely made up for in interest. 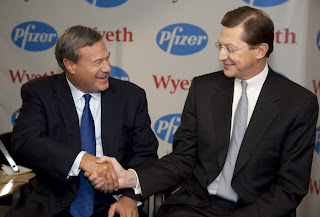 For this is the deal that marked the beginning of a new kind of Big Pharma. For better or for worse, it turns Pfizer from an R&D-focused, high-risk, high-reward company into a diversified, industrialized group whose investment appeal is less about growth than about dividends, efficiency and value.

In its scale, the transaction symbolized the scope of Pfizer's--and other Big Pharma's--challenges, and in its content, it captured--in one fell swoop--many of the individual strategies drug firms are pursuing in order to escape from their R&D productivity problems. The deal furnished Pfizer with biologicals--supposedly faster-to-develop, easier-to-protect than small molecules--and thus with a chance to compete in the much-vaunted biosimilars opportunity, too, which management is beginning to talk up. The deal also provided vaccines, once a dowdy corner of health care but now Big Pharmas' ticket to good government relations, emerging market access and--exemplified by the ongoing swine 'flu outbreak--pumped up revenues.

And Wyeth brought to Pfizer a significant consumer business (not as big as the one Pfizer sold to J&J only a few years ago, but still ...) thereby offering access to non-Western markets, and, as importantly, to a new, lower-cost range of products.

And that's the point: Pfizer has decided its only way to survive is by providing a far wider range of medicines, at a range of price-points, across a range of markets. What it sorely lacks in innovative R&D output it will make up in breadth-of-offering, economies of scale and lower costs. As a senior Pfizer source was quoted in this IN VIVO feature:

"The way to deliver earnings growth isn't what we did in the go-go days of the '90s, but rather, it's emulating what the consumer package goods companies, Coke, Pepsi, Procter & Gamble did. There was never great top-line growth there--3-8%. But if you grow your expense line at a much slower rate you can still achieve double-digit bottom-line growth--a predictable 10-13%."

All that makes sense, surely, in a payer-constrained world with increasing generics and where most future growth is predicted to come from generic- and OTC-dominated developing markets like China.

Maybe. But, you ask, isn't Pfizer chickening out of blue-sky R&D? If it's not the end of the story it's certainly the end of the chapter on blockbuster, primary care drugs. Pfizer isn't giving up internal R&D, but it's definitely demoting it, betting that purchases can fill the gaps. And it's betting, too, that it can create the kind of small-unit creativity within its far-larger walls that GlaxoSmithKline has so vocally advocated.

The deal's critics say Pfizer should have gotten smaller, not larger. It should have followed Bristol. Pfizer considered shrinking, and spin-offs, according to strategy SVP Bill Ringo. Too complicated and risky, he and his colleagues concluded.

But far from choosing the easy option, it's arguable that buying Wyeth was equally, if not more, risky. Even following the R&D re-org, headcount cuts and a 35% reduction in global R&D square-footage, questions remain. The Big Pharma-turned-GE hasn't yet proven that it has a new, sustainable lease of life, far from. But that it's daring to try--well, that deserves a gold-plated* DOTY award, surely? (*not really)
Posted by Egypt Conflict at 11:30 AM