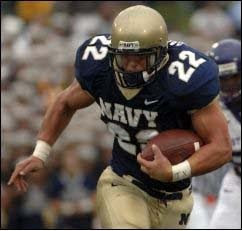 Sports betting sharps can’t rest this week. Even though bowl season hasn’t officially started, this weekend treats us to the Army/Navy game. Navy has the 53-49-7 edge in the all-time series and seeks an eighth straight win entering their 110th meeting. Can Army regain respectability?

Army has a long way to go before we can trust its NCAA football odds against Navy. The Black Knights lost 34-0 to Navy last season and have been outscored 72-3 over the last two meetings. It’s possible, however, that Army can mount a better offense this time around. Its rushing attack ranks 14th in the nation. Freshman quarterback Trent Steelman was hardly tested as a passer, throwing just 90 times, but he was featured as a runner, leading the team with 690 yards on 191 carries.

Eventually, Army has to see what it has with Steelman as a downfield passer. Considering that Navy ranks 60th in the country against the pass and allowed 365 yards through the air against Hawaii, now would be a logical time for Army to experiment. Given their conservative game plan to date, however, I wouldn’t count on it happening in my football picks.

Navy brings a similar offense to the table, ranking third in the country and calling a disproportionate amount of running plays versus passing plays. Ricky Dobbs is the Midshipmen’s “quarterback” but was their primary ball carrier all year, rushing 252 times for a whopping 23 touchdowns. If Army contains Dobbs, Vince Murray can step up; he ran for 884 yards this season and exploded for 248 rushing yards against Hawaii.

The problem for the Black Knights is that Navy matches up as a better version of Army. Both teams run the ball extremely well but Navy simply does it better. Army may have narrowed the gap since last year but that may pull them within 20 points, not 14. Expect a decent game but Navy should cover the spread and extend its winning streak.

Posted by Egypt Conflict at 5:47 PM