Army vs Navy Odds – Army has improved, but not enough to beat Navy 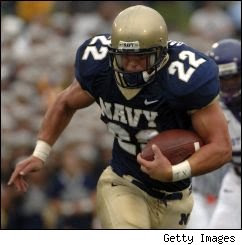 The sports betting odds for Saturday’s Army vs Navy betting matchup have the Black Knights as a huge underdog, even though they’ve improved a lot from last year, and they still have a bowl game to play for. But is that enough to end a seven-year losing streak against their interservice rivals?

The Black Knights (5-6) have won their last games to stay in bowl contention, and a win this week would put them in the EagleBank Bowl, bouncing UCLA. Army is powered by the 14th-ranked rushing attack in the nation, led by freshman quarterback Trent Steelman, who has run for 100 yards or more in two of his three games. Patrick Mealy also gets carries in Army’s version of the triple-option, while Alejandro Villanueva and Damion Hunter are the main targets when the Black Knights decide to throw. But something that may hurt their Army vs Navy odds in this game is their run defense, as Army is 66th in the nation against the run.

This fits right into Navy’s (8-4) gameplan as they’re third in the country in rushing. Junior pivot Ricky Dobbs leads the team in rushing, despite playing the last few games with a cracked kneecap, so no one can ever question his toughness. Vince Murray is another weapon in Navy’s triple option, while Mario Washington’s nine receptions leads the team. Defensively, the Midshipmen are 44th in defense, including 41st in stopping the run.

Army vs Navy odds in your sportsbook have the Midshipmen as a two-touchdown sports betting favorite, and they’ve won seven in a row over the Black Knights, including two straight beatdowns by a combined score of 72-3. The Black Knights are going have to figure out a way to stop the run as they allowed 222 rushing yards in a win at North Texas last week. Navy’s pass defense was carved up in Hawaii last week, but they’re playing a team who, like them, think of passing as an afterthought. Army has played well this year, but they still have a way to go to catch up to their rivals at Navy.

Posted by Egypt Conflict at 5:29 PM