Ronaldo and Zidane will play in January, "Match Against Poverty" 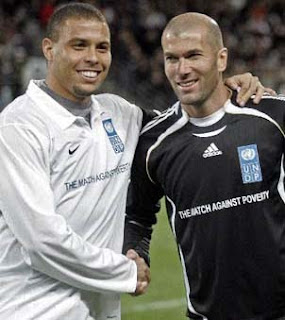 Ronaldo and Frenchman Zinedine Zidane advert today that the upcoming "Match Against Poverty" will take place in Lisbon on 25 January 2010.

The meeting, organized every year to raise funds to finance anti-poverty projects in Asia, Africa and LatinAmerica, face a team that will feature the two stars to a combined figure of Benfica.

For the first time since he organized the charity event, Ronaldo and Zidane will be on the same side. They will play alongside other renowned players.

"No one is a spectator in the struggle to end poverty," Ronaldo said in a statement, which called for "work together as a team" to achieve the eight goals gathered in the Millennium Development Goals (MDGs ).

The MDGs is an agreement by all 192 UN members and at least 23 international organizations that are committed to reducing extreme poverty, reducing child mortality and combat epidemics such as AIDS. It has eight goals to develop until 2015.

"We write these eight goals through commitment, teamwork and willpower," said Zidane.

The seventh edition of "Match Against Poverty" will be played at the Stadium of Light where Benfica usually serves as a local.

Posted by Egypt Conflict at 6:02 PM