Corbett's Last Days on the Trail 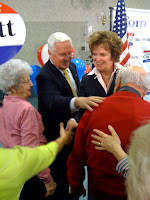 The Pennsylvania Gubernatorial election is just days away and Republican Tom Corbett has led Democrat Dan Onorato in the polls throughout the entire election. DUQ’s Scott Detrow went on the road with the Attorney General and found he is using the last few days to urge supporters not to become complacent as what has been a low-key gubernatorial campaign winds to an end.

A look at Democrat Dan Onorato's campaign can be heard tomorrow during Morning Edition on 90.5 FM in Pittsburgh
Posted by Egypt Conflict at 2:40 AM