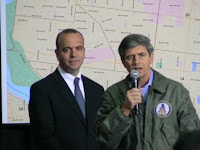 President Obama is warning Pennsylvania Democrats their party could lose Tuesday, if voters don’t amp up their energy over the coming days.
Speaking for less than ten minutes to a crowd of about 16-hundred people in Philadelphia Saturday, Mr. Obama urged Democrats to knock on doors and make phone calls between now and Election Day.

"The key right now is not just to show up here. It’s not just to listen to speeches. It’s to go out there and do the hard work that’s going to be required to bring this home over the last few days."

But interviews with attendees, Joatta Glover, Jamie Papas and George Scott, revealed a wide gap, when it comes to support for the president, compared to enthusiasm for Tuesday’s Senate, gubernatorial and Congressional elections. 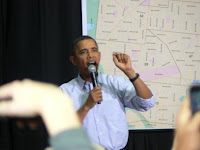 "I want Joe – what’s his name? Joe Sec…sec…Sestak? Sestak. Yeah I want him to win.
I’m going to sound bad – I didn’t register. I went to the day it was due – my mom yelled at me – but I just didn’t get do.
Governor – what’s his name? Dan Onorato? I can’t pronounce it."

Top Democrats say big turnout in Philadelphia and its suburbs is key, if the party wants to win.
Posted by Egypt Conflict at 6:20 AM