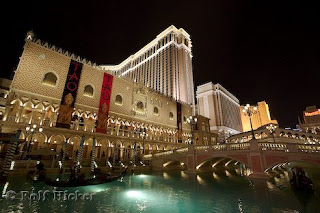 NEW YORK - Las Vegas Sand Corporation (LVS) reported record revenue and record profit for their fiscal third quarter. Allan Edwards the CEO of The Markets Are Open said "LVS just went KOBATA." KOBATA is Wall Street lingo for knocked it out of the ball-park above top anticipations. Edwards continued "KOBATA is a rare term seldom used on the street, dare I whisper that LVS has just hit the KOBATA nail on the proverbial head." LVS reported revenues of $1.91 billion, with net income of $268 million, $168 attributable to common shareholders which is 21 cents a share. Adjusted EBITDA which is earnings before income tax and depreciation came in at $335 million. The reason net income attributable to common shareholders is significantly lower than net income has to do with LVS's obligations for preferred shares and non controlling interests.

Shares are currently up 10% in after hours trade which is from the time the markets close until 8 PM where shares continue to trade usually at a lower volume. This rally has seeped over into fellow casino operators, Wynn Resorts and MGM Resorts International whose shares are up 4% and 2% respectively.

Edwards was asked if he had any closing remarks he replied "LVS is starting to remind me of Netflix, the company's market cap is approaching record levels, the only difference is I like it more, but I would be very cautious here."
Posted by Egypt Conflict at 4:44 PM