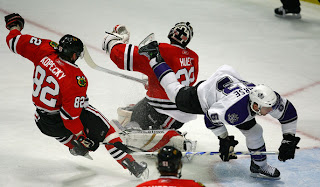 Very interesting game on the ice, between LA Kings and Chicago Blackhawks. Kings is the new season after eight games, six wins, including two in overtime and two defeats, both in regular time.
Chicago has after 10 games, five wins, including two in overtime and five defeats, of which only one in overtime.
In this game the first chance to leave Chicago, a very important game for Chicago, which has only victory option, if you want to keep up in the rankings. Kings has 25 goals and 19 receive, and Chicago has 29 goals and 28 received, which shows that people from Kings to defend better, but the attack is very important.
The Kings of the penalties came after a victory in front of the Minnesota, after the match ended 2-2. The Chicagoans come after a defeat, 3-2 in front of the Columbus Blue Jackets in a game where Chicago led 2-0 after the first period and then lost incredible match.
In this game people from Chicago will be very motivated and determined. In direct matches, Chicago leads 3-1 in previous season and this game will count on a victory for those in Chicago at least two goals.
Posted by Egypt Conflict at 9:35 AM