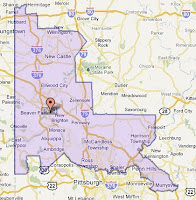 Pennsylvania's 4th Congressional District spans six counties in western Pennsylvania and since 2007 Democrat Jason Altmire has kept Republicans at bay. In the May primary Keith Rothfus defeated former U.S. Attorney Mary Beth Buchanan and is challenging Altmire by hitting him on issues like the economy, expiring tax breaks and health care reform. Rothfus, a private industry lawyer, served under President George W. Bush for two years in the Department of Homeland Security heading an office of faith-based initiatives after Hurricane Katrina. Rothfus says it's not enough that Altmire didn't vote for President Barack Obama's health care law, "You have a representative who would rather go on national tv and hem and haw for weeks on end, that's not the kind of leadership we need." And despite Altmire's "Blue Dog Democrat" label, Rothfus says he's a traditional liberal at heart. Rothfus says he wants to get the economy rolling again and vows that he would pay attention to the private sector and the job creators.

Jason Altmire joined Congress after beating three time incumbent Republican Melissa heart. He says he has a record of listening to constituents regardless of political affiliation, saying his district isn't interested in a partisan politician "they want someone who can get things done in a highly charged political environment." And while he says he'll leave it to Rothfus to distinguish himself, Altmire notes that he was a high profile participant in the discussion leading up the health care reform vote. "I was a pretty visible player, both in western Pennsylvania and around the country and I'm surprised, of all the lines of attack, that people would come at me for not being visible enough." Altmire says he's looking ahead to November 3rd, when he thinks those willing to work across the aisle will wield he most influence in Washington.

Click here to listen to an interview with Republican candidate Keith Rothfus.

Click here to listen to an interview Democratic incumbent Jason Altmire.
Posted by Egypt Conflict at 3:30 AM