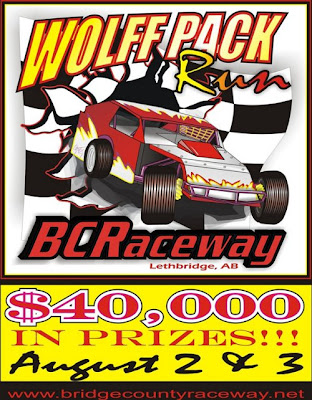 Lethbridge AB - Western Canada's biggest purse in the history of oval Modified dirt racing takes place August 2 and 3 at Lethbridge's own, Bridge County Raceway (BCR) with the Wolff Pack Run 2008. This is the fourth year for the Wolff Pack Run which is sponsored by Jaron Wolff Ltd.(Georg J.P. Wowk), from Edmonton, Alberta. Jaron Wolff Ltd. began this modified race in 2005 with the purse growing each year. This year Jaron Wolff Ltd made the purse $20,000 and owners of BCR James and Kathy Hadnagy and Geroge and Marj Mercer added another $20,000 to bring the purse to a whopping $40,000 in cash and prizes. With an anticipated field of 50 cars or more, coming from all over western Canada and possible the north western US, this year’s Wolff Pack Run promises to be 2008's most exciting two day racing event on dirt for both racers and fans alike.

Not only is the Wolff Pack Run 2008 making history for the size of its purse, but this is the first time in Alberta history that IMCA Canada and IMCA USA have opened their doors and are coming together to sanction a race. This means that any racers coming to race here from the US will receive their points

This is a dream come true for co-owner Kathy Hadnagy that took over three years to become a reality. "I constantly emailed USA IMCA's Brett Root and it finally took a trip to Las Vegas, Nevada to track him down to get him to agree to sanction a race for me. Just to hear him say okay", says Hadnagy, "I just can't wait, this puts BCR right up there at the top! ", she giggles.

The Wolff Pack Run is a race dedicated to Modified Racers that has been held in a different location each year. The first Wolff Pack Run, in 2005 was held at Edmonton International Raceway. In 2006 it was held at Castrol Raceway in Edmonton and moved to Race City in Calgary in 2007. Gates open at 5:00pm with racing starting at 7:00pm each night.
http://www.bridgecountyraceway.net/
Posted by Egypt Conflict at 6:31 AM