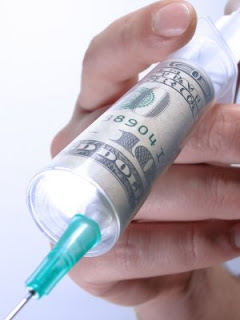 If a generic competitor was waiting in the wings with an improved version of Genentech’s Avastin, how much less would the company be worth in the eyes of Roche?

Probably a lot, you’d say. Probably a lot less than $44 billion, which as everyone on the planet knows by now, is what Roche bid to acquire the remaining 44% of Genentech earlier this week.

We’re not suggesting there is anyone waiting in the wings to undercut Avastin at this very moment. And when it comes to analyzing Roche-Genentech, FOBs probably isn’t the first thing that jumps to mind. (Which is why, incidentally, we’ve already blogged on the deal here and here. And why we’re planning all kinds of great coverage in this week’s issue of “The Pink Sheet.”)

Indeed, there are lots of other questions: Does Roche’s price justify the quality of the R&D portfolio it would acquire? Is the timing of the deal more about financial strategy than innovation, as Roche claims? And does any of that matter if the acquisition results in a massive walkout in South San Francisco?

There’s no doubt these are hard times for pharmaceutical companies—low approval rates, a stalled R&D engine, payor pressure and the risk of health care reform. And while that’s hit across Big Pharma and Big Biotech, biotechnology companies have enjoyed one major upside: infinite product exclusivity.

That honeymoon is about to be over.

We’re just not talking about Congress authorizing a regulatory pathway for follow-on biologics. Or even competition from generic companies. The biggest threat to the biologics industry may come from within Big Pharma itself—a group that is incredibly experienced in manufacturing products, has money to invest, and is desperate for a few more dollars on the bottom line.

As we’ve written in The RPM Report, Big Pharma companies haven’t been shy about their interest in developing “me-betters” that get around IP issues with existing follow-on biologics.

Indeed, some of the biggest names in Big Pharma have acquired technology platforms that could be used create ther own versions of existing large molecules: GSK (Domantis); Bristol (Adnexus); Wyeth (Haptogen); and Teva (Cogenesys). And some executives (like JP Garnier and Jeff Kindler) have acknowledged plans to do just that.

So what does that all have to do with Roche-Genentech?

It’s clear FOBs are a major threat to biologics IP. Even if Congress doesn’t pass legislation authorizing a follow-on biologics pathway, FDA will continue to approve “me-too” large molecules on a case-by-case basis. And if the technology platforms Big Pharma has been snapping up lately is any indication, we’ll start to see the March Of The “Me-Better” Biologics—and the pricing pressure that follows.

For Roche, staying ahead of that curve means finding a way to make biologics faster and cheaper. And the best way to do that is through post-merger synergies. So contrary to the message Roche is sending to investors, the timing of the deal probably has less to do with “innovation” and more to do with squeezing out savings.

At the very least, it’s another sign that that Big Pharma companies are thinking about follow-on biologics in dealmaking—either by acquiring companies with the technology to make me-betters, or by positioning themselves in a way to compete with any competing large molecules that may come down the pike.

It's one more pressure that will make biologics less profitable in the long run—and one more reason for Roche to head it off at the pass. Genentech created Roche’s pipeline—and propelled the company to the number-one growth stock despite what is arguably the worst R&D in the industry. Now it needs to protect that investment.
Posted by Egypt Conflict at 7:55 AM