KPMG LLC released a survey this week declaring that a venture capitalist don't expect to see a "consistent flow" of IPOs until 2010.

Odd, dire predictions like that coming from an industry populated by eternal optimists. (We later learned the survey of 297 included venture capitalists, corporate buyers, bankers and entrepreneurs.)

Ah well, as we've discussed in the past, times are tough. However, our own private survey of a few investment bankers paints a slightly brighter picture for life sciences IPOs. But it's only slightly brighter. 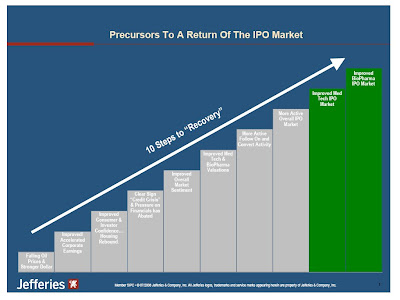 However, as we noted in our upcoming IN VIVO magazine, predicting when the IPO window will open is not unlike trying to predict when the winter's snow will melt. Yes, it'll happen eventually, when the weather gets warmer, and if you project out far enough into the spring calendar you've got a greater chance of being correct.

But so many macro-economic factors must be taken into account when crystal balling the IPO market. Fortunately for us, investment bank Jefferies & Co. Inc. presented us with a clear road map of what must happen for medical device and biopharmaceutical IPOs to return.

(Jefferies also provided us with some fascinating data tracking IPO success with stage of company. The results will surprise. Check out the magazine.)

Bottom line, our gurus are hoping to see things coming around sometime next year. But so many balls still hang high in the air.

Not surprising but certainly worth noting: SR One Ltd., one of the more if not the most venerable of corporate venturing programs, has seen its last days as an independent entity. It's merging into the new GSK Ventures, according to this morning's VentureWire Lifescience.

We suggested this would happen when we broke the news on GSK Ventures back in May. True, SR One had staying power. The unit has existed since 1985 when Peter Sears started to invest on behalf of SmithKline Beckman.

But the group's West Conshohocken office must have been equipped with a revolving door to handle all the changes in management since Sears' retirement a decade ago. The units managers have swung in and out of the place leaving for opportunities in the venture world or back at Daddy corporate.

GSK Ventures new manager Russell Grieg, a direct report to Andrew Witty, the new GSK CEO, will work from the group's office in Pennsylvannia, according to the report. SR One's web says the group has moved to East, we presume, to Conshohocken.

Is the out of control locomotive starting beginning to slow? VentureWire reported this week that first half investments in healthcare companies dropped 30% compared to the same period last year. Overall venture capital dropped only 12.4%

Medical-device funding is also down. Investors put $797.6 million into devices companies in the second quarter, down from $1.05 billion in second quarter of 2007. Device investing stands at $1.6 billion for first two quarters, down from $2.07 billion last year.

We generally agree with the VCs quoted in the artice. This seems like a healthy correction and a wise one given the current economic state. But we'll provide deeper analysis of our own fund-raising data in the September Start-Up.

VentureWire Lifescience also confirmed what we reported a few weeks ago. Foundation Medical Partners is raising a fund. VWLS puts the target at $150 million which sounds about right to us....VWLS also says that OrbiMed Advisors has hit the $150 million for its Pan-Asian health care fund, Caduceus Asia Partners LP. OrbiMed added to its Asia-based team with the hiring of Sunny Sharma, a private equity partner in Mumbai. Sharma joins managing directors Nancy Chang and Jonathan Wang. Sharma previously had been managing director of Easton Capital.

Remember the VC Comic? They brought a little bit of laughter to an otherwise dreary day of venture capital reporters who covered the stone-cold life sciences industry rather than the red hot Internet investments. Of course, we got the the most important laugh--the last one--a few years later. (Thanks to HEC Paris Private Equity and Venture Capital Club blog.)
Posted by Egypt Conflict at 4:50 AM