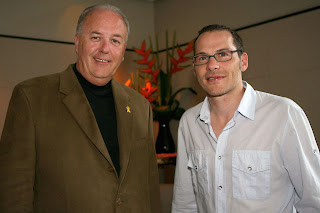 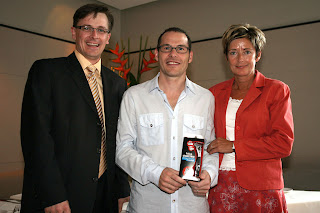 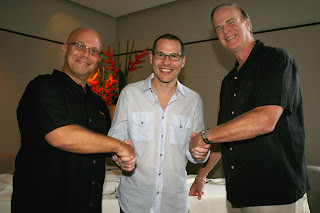 MONTRÉAL (July 28, 2008) - Jacques Villeneuve, driver of the Braun Racing No. 32 Toyota Camry in the second annual NASCAR Nationwide Series event at Circuit Gilles Villeneuve in Montreal on August 1-2, 2008, met with all his Montreal race sponsors on Monday afternoon. In a private meeting, Jacques was introduced to the principals of each of the six companies that will back his homecoming race.

For the Montreal Nationwide event, Villeneuve's No. 32 Camry will be sporting the colors of Groupe Savoie of Les Résidences Soleil, Schick Canada, L'Équipeur and Marks Work Wearhouse, the UPS Store Canada, Hype Energy Drinks, and Ganotech.

Jacques Villeneuve has captured championships in both the CART Series in 1995 and Formula 1 two years later. He has also won the 1995 Indy 500. Villeneuve last raced in Montréal in 2006 with the BMW Sauber F1 Team. He scored his best Montreal F1 results in 1996, finishing second behind his Williams teammate Damon Hill. The Montreal race will mark Jacques Villeneuve's debut in the NASCAR Nationwide Series

Posted by Egypt Conflict at 6:15 AM