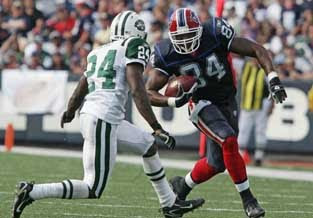 Warm up for Saturday’s Florida vs Alabama picks with some NFL action on Thursday night, as Buffalo “hosts” the New York Jets in Toronto. The Bills come into this game as the underdog, but they could take advantage of an ailing Jets quarterback who had a nightmare the last time he faced Buffalo.

The Jets (4-7) fell 16-13 in overtime at home in Week 6 to the Bills, and Sanchez was a major culprit, going 10-of-29 for 119 yards and five picks in the worst game of his career to date. This overshadowed a career day for running back Thomas Jones, who had 210 yards and a score on 22 carries as the Jets ran for 318 yards. The Jets also committed 14 penalties on the day, and they’re not good enough to overcome that many mistakes, even after a 17-6 win over Carolina last week.

In that win over the Jets, Ryan Fitzpatrick took over for the injured Trent Edwards, going 10-of-25 for 116 yards and a touchdown, along with a pick. Now, Fitzpatrick is entrenched as the starter and he’s built a good connection with Terrell Owens, who has averaged 126 yards over the last three games. The Bills are coming off of a 31-14 pasting of Miami in which they exploded for 24 points in the final quarter, and as NFL odds has made them an underdog, they could even more motivation.

NFL odds in your online sportsbook have the Jets as a 3-point favorite, but they’ve dropped six of their last 10 against the Bills overall. Even though their defense was on fire against the Panthers, it’s tough to put the Jets in your NFL picks until Sanchez gets his head back the game, throwing seven picks in his last three games with only a pair of touchdowns. Also, he left the Carolina game with a knee injury and even though he says he’ll be fine, you may want to check out the news wire after Wednesday’s practice. If he’s at less than 100%, even the New York defense can’t save them on Thursday.

Posted by Egypt Conflict at 7:39 PM