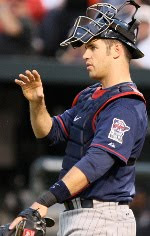 Minnesota Twins fans aren't taking too kindly to my column yesterday about how I think Joe Mauer will be a Yankee in 2011. In fact, they're up in arms over my shameless coveting of their team's best player. Imagine that.

Here's the story. In "AL MVP Joe Mauer - A Future Yankee," I wrote, "Why wouldn't he want to be a Yankee? Playing for the Bombers is the stuff dreams are made of!"

For some strange reason, Twins fans weren't exactly pleased over this post. Twin Cities fan Two Seam Fastblog was not amused, writing this in our comments section:

This needs to stop. Because you know what, Yankee fans, Mauer's not coming to you. You can't have him, because the Twins can afford him, and since they CAN afford him, they will retain him. Check back in 7 years, then maybe you can try a 33 year old Mauer. That seems fair. But if the Twins can offer 120M to Santana, they can offer 140M to Mauer. We have a new stadium. We have payroll room. We're not THAT small market, despite what a lot of Twins fans will lead you to believe.

Speaking of that new stadium, what's the over/under for snowouts? Ten?

Do you realize that every move the Twins' front office makes has to be passively approved by Mauer? He wanted the team to do something in terms of trades this past season. I give you, Carl Pavano, Orlando Cabrera, Jon Rauch, Ron Mahay, JJ Hardy. We locked up his best friend, Justin Morneau. He was asked for input on our new uniforms, for gods sake.

I'm snickering over how much former Yankee Carl Pavano has turned his career around in that he was actually a hot property for a playoff race this year. And yes, he did bring his A-game to the postseason. Too bad A-Rod beat him with his own A-game!

Yeah, you joyless bastards can dream, but I suppose you'll just have to rely on one of the most catching rich farm systems in baseball for 7 more years. Or for Brian McCann. Whatever. I'm just sick of you trivializing breaking the collective hearts of an entire region of the country. Because that's what losing Mauer would do to us. He isn't important to just Minnesota, but parts of Wisconsin, Iowa, the Dakotas. We kept Kirby Puckett on one of the biggest contracts in history (WOW SAME AGENT AS MAUER), and we'll keep Joe. Screw you guys.

So if Mauer becomes a Yankee, we'll have broken the hearts of not just a state, but a whole region of the U.S.? Cool!

C'mon, TwoSeam. Do you think this shameless play to my emotions will sway me? Remember, I'm a Yankee fan. I have no heart!

The commenter continued this argument at the blog Two Seam Fastblog.  Go there to read more of the case against this Squawker, in a post entitled "Thy Heartless New Yorkers shalt no longer Covet our Dear Mauer." I love it!


The Over The Baggy Twins fan site linked to my column as well; they were also not thrilled with Yankee fans drooling over Mauer.

And other Minnesota fans wrote into Subway Squawkers to give me grief. Myjah said:

Mauer isn't going to become a Yankee. Want to know why?

"I've had a chance to go up in the deer stand a few times, and everyone here knows that when you're up in the deer stand you think about a lot of different things," Mauer quipped. "Just about the type of year we had as a team, the run that we had. I think coming into the season, my goal personally was just to stay on the field. To be here sitting today and being the MVP is more than I could have ever imagined."

Yeah--up in his DEER STAND, probably by his log cabin in the middle of nowhere where he does things like mow his own lawn.

Do you really think Joe is aching to live/play in New York City so he can make even more millions of dollars?

The Twins will offer him the biggest contract in Twins history. With their new stadium, they can afford Joe. He'll stay in Minnesota by his grandparents (who come to every Twins game) and his deer stand. That's just the type of guy he is.

I used to live in Texas, where the opening day of deer season is as highly anticipated an event among hunters as the opening of the new "Twilight" movie is among teenagers. And this deer-hunting event happens everywhere in November. So Mauer could be a Yankee, and still come home to Minnesota and shoot to his heart's content in the offseason. Come to think of it, we have deer-hunting in the tri-state area as well. And with all the money Mauer could make as a Yankee, he could build the most souped-up deer stand ever, and wear an NY camouflage hat to boot!


John from Minneapolis did not think the possibility of endorsement money would not be what might sway Mauer to become a Yankee. He suggested a different reason:

I think that the lure of the pinstripes, in the sense of being part of a historic, championship organization, will be more of an enticement for Mauer than money. I think he really does want to play on a World Series team, and that will decide whether he stays in Minny or not.

By the way, Minnesota fans, I despise Brett Favre. My hatred for the Minnesota Vikings quarterback is long-standing and deep. I look forward to when he turns into a pumpkin again, the way Roger Clemens did in the 2007 ALDS. So there!

What do you think? Vote in our Joe Mauer poll at the top of the page, and leave us a comment!

Posted by Egypt Conflict at 5:49 AM