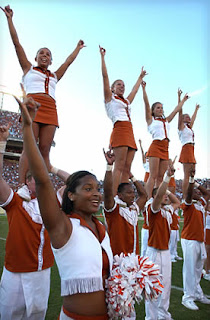 A lot of football fans are focused on NFL betting right now, but that's no excuse to ignore Rivalry Week in college football. There are some lopsided spreads but, as well all now, hated enemies have a knack for defying the odds and derailing their rival's bowl hopes. Let's take a look at a few of the bigger games on this week's NCAA football odds.

The Longhorns (11-0) need one more win to make the Big12 Championship, and they're so close the BCS Championship game they can taste it. A&M, meanwhile, has been very mediocre at 6-5. Texas has the advantage pretty much across the board. Colt McCoy leads an offense that can hang up a lot of points in a hurry, while the defense has surrendered 20 points or more in just two games all season.

The Aggies' offense looked very sharp last week, racking up 375 yards on the ground, but they can't be expected to do that every week—especially against the tough Longhorns. Even if they do, it won't matter; A&M's defense has been shoved around all season, including 65 points to Oklahoma. That should be a good barometer of what Texas will do this week. Take the Longhorns on Texas Texas A&M betting.

The Iron Bowl is especially important for 11-0 Alabama, which is ranked second in the nation and driving toward the BCS Championship. Auburn, on the other hand, suffered a meltdown after winning its first five games; the Tigers have lost four of six since then.

Offensively, Auburn can probably hang with 'Bama—assuming it brings its A-game. The Tigers have cooled as of late, particularly on the road (Ben Tate, the team's leading rusher, has rushed for 100 yards just once in his last four games). Crimson Tide running back Mark Ingram is a Heisman candidate and has racked up 1399 yards and 15 total scores this season.

The difference-maker in this game? Defense. Alabama has the top defense in the nation, including the second-ranked rush defense and fifth-ranked pass defense. With Tate struggling to get going, that's trouble. Ingram, on the other hand, should have plenty of room to run—Auburn is 88th in rush defense and allowed 169 rush yards in last week's loss to Georgia.

Alabama is ranked second in the country for good reason—this is an excellent football team. The Crimson Tide will run the ball early and often so the scores may not pile up quickly. Don't fret, however; they'll cover the 12-point spread by the end of the game on Alabama Auburn betting.

Posted by Egypt Conflict at 7:40 PM