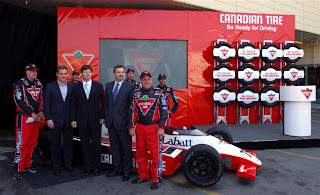 TORONTO, ON - Honda Indy Toronto welcomes an important new member to its growing list of official sponsors for the 2010 race: Canadian Tire. The announcement, which is part of a broad-reaching Canadian Tire motorsports program, marks the first time the general merchandise retail leader will sponsor the Toronto race.

Canadian Tire will be sponsoring various onsite activities and programs. The company will have naming and branding rights to pit row and the support series paddock, and will provide apparel to more than 500 event volunteers through its Mark’s division. Canadian Tire will also add a touch of quality living to the corporate hospitality area at the race site through an outdoor lounge and green spaces at the hospitality suites. The retailer will also create a large interactive display in the popular Thunder Alley.

“Partnering with Canadian Tire has been among our primary aspirations since bringing the Indy back to Toronto,” said Charlie Johnstone, Vice President and General Manager, Honda Indy Toronto. “Their presence at this year’s race will have a direct impact on the experience our fans, visitors and other partners will enjoy at the track.”

About Honda Indy Toronto: The Honda Indy Toronto, Ontario’s largest annual sporting event, takes place from July 16 to 18 on the streets surrounding Exhibition Place near Lake Ontario and downtown Toronto.  With more than two decades of open wheel racing history in Toronto, the Honda Indy Toronto is among the most respected motorsports events in North America and features a festival-like atmosphere that includes the fastest racing series on the planet, celebrity athletes and three action-packed days of live entertainment and interactive activities. For more information and to purchase tickets visit www.HondaIndyToronto.com  or call 877.503.6869.

Posted by Egypt Conflict at 1:46 PM