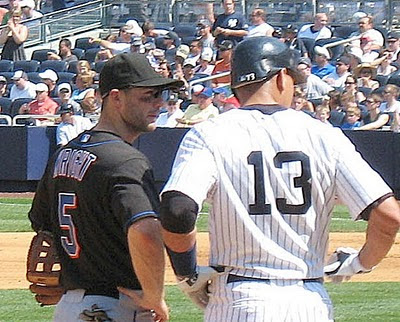 Squawker Lisa and I went to the Subway Series Saturday, and in honor of the occasion and that fact that we were getting to sit in unbelievable seats, I decided to get a Mike Pelfrey shirt to wear in place of my usual Jose Reyes shirt. I'm hoping it was just a coincidence that Pelfrey lost only his second game of the year while Reyes hit two homers.

So after going 5-0 in my first five Met games this year, I finally saw a loss. Guess there's no sense in planning your games around who's pitching - the starters in the five wins I saw were John Maine twice, R.A. Dickey twice and Jon Niese. Pelfrey takes the mound at 9-1 and gives up five runs in the first four innings.

But I can't complain too much, not after my experience at last year's Bronx Subway Series visit (the Castillo debacle). And most of all, as Squawker Lisa detailed yesterday, the Squawkers were fortunate enough to sit in the Legends seats, six rows behind third base. Thanks again to the good folks at Blimpie for making it possible.

I'm generally content to sit in the upper regions of Citi Field, especially since the Promenade is the same height as Shea's mezzanine. And for me, field level down the line is a tradeoff from upper deck behind home plate. But six rows behind third base? I could sure get used to that!

The last time we went to a Subway Series game at Yankee Stadium, Lisa couldn't stop laughing after the Castillo play. Now it was my turn to laugh - she finally gets to sit in what she called the "A-Rod seats" and her favorite player is not playing third! And Derek Jeter is not playing short! At least, as the above photo shows, A-Rod made it to third as a runner.

Fortunately for me, David Wright and Jose Reyes were in the field, and Reyes, as already noted, had a great game.

Sitting in these seats included a pregame buffet, which was as spectactular as we had hoped it would be. Actually, the buffet continues into the seventh inning, but we got the bulk of our eating out of the way earlier so we could concentrate on the game. Besides, with options such as sushi, prime rib, omelets to order and much more, it's probably just as well that we needed to get to our seats!

The buffet features a celebrity chef, and on Saturday it was Frank Pellegrino of Rao's, the legendary Italian restaurant that is impossible to get into. The Rao's offerings were penne and meatballs and their special seafood salad. I had seconds.

So we truly had a once-in-a-lifetime day. If only the Mets had won!

Posted by Egypt Conflict at 9:11 AM