WoO LMs: Francis stays ahead of the fray in Tim Logan's car to emerge triumphant at Cornwall 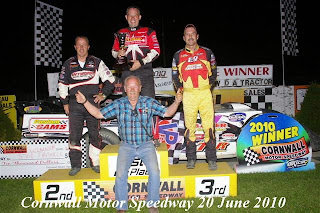 CORNWALL, ONT - June 20, 2010 - Steve Francis got his groove back on the World of Outlaws Late Model Series with a dominant performance in Sunday night’s 50-lap A-Main at Cornwall Motor Speedway.

Making his first WoO LMS start of the season in a Rocket car owned by his crew chief Tim Logan, Francis took advantage of a pole position start to lead every lap of the national tour’s third annual visit to Ron Morin’s finely-manicured Canadian quarter-mile oval.

Francis, 42, of Ashland, Ky., rolled to his second series victory of 2010, staying safely ahead of the sometimes wild position-swapping that went on behind him. In fact, second place changed hands five times among three drivers during the event, but no one was able to seriously challenge the 2007 WoO LMS champion.

“As the racetrack slicked off (the car) just got better and better and better,” said Francis, who earned $10,600 for becoming the fourth repeat winner of the 2010 WoO LMS campaign. “In the feature the thing was basically on a rail. You could drive it about anywhere. We ran the top of (turns) one and two and the top of three and four at points, which shows how good it was.”

Darrell Lanigan of Union, Ky., futilely chased Francis under the checkered flag, finishing 1.338 seconds behind the winner in his Rocket car. The 2008 WoO LMS titlist overtook Tim Fuller of Watertown, N.Y., coming down for the white flag to secure the runner-up spot.

Fuller, who had passed Lanigan for second just before a caution flag flew on lap 32 and briefly peeked underneath Francis following the restart, settled for a third-place finish in the Gypsum Express Rocket car. The run ended Fuller’s two-race winning streak on the WoO LMS ‘Great Northern Tour.’

Tour rookie Austin Hubbard of Seaford, Del., placed fifth at Cornwall for the second straight year, nipping Dan Stone of Thompson, Pa., by inches at the finish line in Dale Beitler’s Rocket car. The 18-year-old sensation, who started 10th, cracked the top five despite running virtually the entire distance with his car’s steering hampered by a broken rack.

Stone finished sixth – the same position he started the race – after climbing as high as fourth. He was bidding to pass Lanigan for third on lap 21 when he slid off the backstretch, dropping him to seventh and forcing him to spend the remainder of the distance working his way back into contention.

Francis had no problems in Logan’s machine, which he finally decided to press into service on this year’s Outlaw trail. He kicked off the Great Northern Tour driving his own Valvoline-sponsored car to finishes of 13th on June 15 at Can-Am Motorsports in Lafargeville, N.Y., and fifth on June 17 at Merrittville Speedway in Thorold, Ont., before Saturday’s event at Quebec’s Autodrome Drummond was rained out. “

“Tim’s put a lot of time and effort into my whole program this year,” said Francis, who had planned to run Logan’s car at Drummond. “Part of our deal this year was I was gonna run his car in some races, but it seems like every time we unloaded his car (this year), it rained out.

“I’m real happy that we finally got to run this thing. It really helps Tim a lot, and it helps (engine builder) Russell Baker too – we ran a brand-new 11-degree motor, something a little bit different. We’ve run this motor twice – we sat on the outside pole at West Virginia Motor Speedway and won here tonight. Obviously, it’s a pretty good car and engine combination.”

Good enough for Francis to cool down the sizzling Fuller and record his 28th career WoO LMS triumph – more than any other driver on the tour since 2004.

“I kept watching where Fuller was because he’s on a hot streak,” said Francis, whose previous WoO LMS victory this season came on March 27 at Lone Star Speedway in Kilgore, Texas. “When I looked and seen he got by Darrell and Clint (Smith) for second, I thought, ‘Well, here he comes again.’

“I saw Fuller shoot in there under me on that one restart (lap 32), but I just said, ‘Hit your marks and you’ll be fine.’ I don’t want to say I was that confident, but I knew my car was so good that if I hit my marks, I’d be OK.”

The 42-year-old Fuller, who started fifth, tipped his helmet to Francis after falling short at a track where he has experience in DIRTcar big-block and 358-Modified competition.

“He was more consistent getting through the ruts and the bumps,” Fuller said of Francis. “I could stay with him for one lap and then he’d start checking out. He was really good.”

Lanigan, who turned 40 on June 3, also failed to keep pace with Francis.

“We were set up for the bottom,” said Lanigan. “If we could hit it just right we’d have something for him, but if we missed it we’d just hang there. Francis could just move all around better.”

Lanigan’s second-place finish gave him a big boost in the WoO LMS points standings, moving him from second to third and leaving him just 14 points behind leader Josh Richards of Shinnston, W.Va., who finished 15th with a car that was plagued by handling problems from damage to the left side of its nosepiece. Richards bent his car’s nose when he caught the berm on the inside of turn one just three laps into the race and further damaged it on lap 11 when he swerved into the turn-two hill to avoid Tim McCreadie of Watertown, N.Y., who lurched into Richards’s path when he restarted his car after sliding off the track between turns one and two to bring out a caution flag.

McCreadie, who entered the event ranked second in the points standings, restarted at the rear of the field after his off-track excursion and charged back to salvage a seventh-place finish – right where he had been running on lap 11. He fell to third in the points standings but sliced his deficit to Richards from 36 to 20 points.

Shane Clanton of Locust Grove, Ga., faded to an eighth-place finish after starting fourth. Coleby Frye of Dover, Pa., who took a break from his regular job as car chief of Hubbard’s Beitler Motorsports mount to drive Clint Smith’s backup car, placed ninth and eighth-starter Rick Eckert of York, Pa., was 10th after rallying from an early-race scramble that caused him to fall all the way back to 19th.

Four caution flags slowed the race. After McCreadie triggered the first yellow on lap 11, subsequent cautions were brought out on lap 31 by Richards (stopped and then pitted); lap 32 by Russell King of Bristolville, Ohio (stopped on backstretch); and lap 44 by Chub Frank of Bear Lake, Pa. (spun in turn four from left-front bodywork damage sustained in a scrape while battling Clanton for seventh).

The upset of the evening was pulled off in Ohlins Shocks Time Trials by Frye, who recorded the show’s fastest qualifying circuit after getting a last-minute opportunity to drive Smith’s backup car. The 25-year-old Keystone State dirt Late Model racer ripped off a lap of 12.467 seconds – just a tick off the track record – to earn his first-ever quick-time honor on the WoO LMS.

Heat winners were Francis, Clint Smith and Stone. With the field numbering exactly 24 cars, no B-Main was run.

Smith went on to finish 12th in the A-Main after running second for much of the race’s first half. He was hampered by a broken engine valve throughout the distance, causing a loss of power that cost him ground on each restart.

The WoO LMS ‘Great Northern Tour’ continues on Tues., June 22, at Brewerton (N.Y.) Speedway before concluding on June 24-26 with the Firecracker 100 presented by GottaRace.com at Lernerville Speedway in Sarver, Pa.

For more information on the WoO LMS, visit www.worldofoutlaws.com.

Posted by Egypt Conflict at 6:32 AM