NBA Betting – Lakers, Celtics Down To Game 7 For All The Marbles 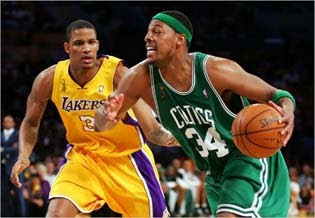 World Cup betting players know the pressure of a Game 7, because after the group stages, every game is a Game 7, where it’s win or go home. The two most storied franchises in the history of the NBA, the Los Angeles Lakers and the Boston Celtics, will square off Thursday night with everything on the line, and for commissioner David Stern, this is probably the only thing better than the Cavaliers/Lakers Finals matchup we all expected.


Kobe Bryant scored a game-high 26 points, but this time he got more help than he did in Game 5 when he scored 44% of the Lakers’ points. But with the defense the Lakers were playing in their 89-67 win over the Celtics on Tuesday, they really didn’t need much scoring help for Bryant as they held Boston to 33.3% from the field, and only 10 free-throw attempts. Pau Gasol had a massive game, coming up just short of a triple-double with 17 points, 13 boards and nine assists, while Ron Artest had 15 points and was a game-high +26 for the Lakers as he was all over Paul Pierce.

Ray Allen was the high man with 19 points for the Celtics, while Pierce was next with 13 points, and the Celtics looked out-of-sorts from the opening period, when they were down by 10. It didn’t get better as they were down by 20 at the half, and the lead was as high as 25 in the second half. This was not a team prepared to play, which is strange when you consider their veteran leadership in the team, and now matters are made worse as Kendrick Perkins played just seven minutes before suffering a knee injury that will probably keep him out of this critical affair.

The Lakers are a 7-point NBA betting favorite in this clash, and they also have an injury worry as Andrew Bynum left in the third quarter of Game 6 and didn’t return as a precaution, and there was no need for him to push it with the Lakers up by so much. The Lakers have been dealing with this during this whole postseason, so it’s not as big a deal to them as it is to the Celtics to not have Perkins in the post. The Lakers are going to need another team effort to put the Celtics away, because Boston is going to come out with more fight than they did in the last game, but the onus will be Bryant and Gasol to be at their best. We’re banking on a big night from Bryant as the Lakers get revenge for the 2008 Finals.

Posted by Egypt Conflict at 7:43 PM