Deals of the Week Goes Hollywood 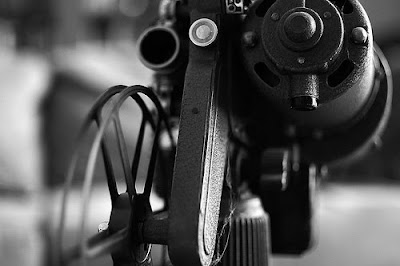 Sadly it's unfortunately not very uncommon for a biotech to meet its demise, especially in today's environment. But it did get us thinking. If the biopharmaceutical industry were a movie, what would it be? (C'mon people, it's Friday.) The first one that springs to mind for this blogger is Risky Business. (Of course the medical devices world needs its own movie too: this bit of Medtronic news has us thinking about the end of Se7en ... "what's in the box??!?!")

Your suggestions in the comments, pls. Meanwhile, not so long ago in a conference room not so far away . . .

The companies will also co-develop systems based on PacBio’s single-molecule sequencing technology aimed at the clinical diagnostics market. They will work exclusively with each other for two-and-a-half years on the program. Several other companies including IBM, Illumina, Life Technologies, Oxford Nanopore Technologies, and newcomer Ion Torrent are developing real-time, single-molecule sequencing technologies, with some geared towards eventually being able to look at the entire human genome. The move by Gen-Probe appears to be part of a strategy gaining favor with life science tools providers to provide an integrated sequencing offering including sample prep, sequence measurement, assays, and perhaps even bioinformatics in one package. Expectations are that technical validation of these systems will come in the next five years, and with sequencing costs rapidly decreasing – one start-up recently suggested the capability for whole-genome sequencing at under $100 around year-end – the clinical diagnostics market appears to be within reach for these companies. --Mark Ratner

Tranzyme/Norgine: In seeking a European development and commercialization partner for ulimorelin, a ghrelin agonist about to enter Phase III in gastrointestinal dysmotility disorders such as post-operative ileus, Tranzyme Pharma thinks it found the perfect fit. Tranzyme’s June 16 tie-up with Netherlands-based Norgine BV includes only $8 million up-front.

But more importantly to the North Carolina biotech, the deal leaves it with North American rights to its lead program, while Norgine obtains rights in Europe, Australia, New Zealand, the Middle East and Africa. In addition to Norgine’s focus on gastrointestinal disorders, CEO Vipin Garg said one of the factors he likes best about the partnership is the regional nature of the deal and in particular that Norgine is “pan-European” rather than specializing in its home market or just a few countries. “A lot of companies want worldwide rights nowadays for products [or] just US or North American rights," told “The Pink Sheet” DAILY. “In our case, we wanted to retain those rights for ourselves and perhaps partner them later or even have the ability to build a small sales force” to sell the drug to hospital-based docs. Beyond the upfront payment, Tranzyme also is eligible to earn up to $150 million in development, approval and commercial milestones; Garg would not break down the biobucks specifically other than to say that the first milestone would be realized upon completion of the first Phase III trial.—Joseph Haas

Bayer/OncoMed: OncoMed Pharmaceuticals pulled in an eyebrow-raising $154 million Series B round in 2008, but investors apparently aren't the only ones that think the company is on to something. The cancer stem cell-focused biotech has signed its second major pharmaceutical collaboration – the only two significant deals in the space to date. The Redwood City, Calif., firm received $40 million upfront June 17 from Bayer Schering Pharma to co-discover and co-develop five agents that target the Wnt cancer stem cell pathway.

The new partnership follows a 2007 deal with GlaxoSmithKline in which privately held OncoMed received an undisclosed upfront payment and equity investment in exchange for option rights to four monoclonal antibodies targeting the Notch cancer stem cell pathway. With potential discovery, development, regulatory and sales milestones, the deal with GSK was valued at up to $1.4 billion. The Bayer/OncoMed tie-up is similarly risk-adjusted: for starters, the German pharma gets an option to license development and commercial rights to antibody and protein therapeutics developed under the collaboration up through completion of Phase I. OncoMed can receive up to $397.5 million in milestones for each antibody or protein therapeutic developed and commercialized successfully, along with double-digit sales royalties. OncoMed will also assist Bayer in developing small molecule cancer therapies that target the Wnt pathway, which could earn it up to $112 million per successful candidate.--JAH

Neurocrine/Abbott: Less than a month after Neurocrine Biosciences said it was seeking a partner to advance into Phase III its novel gonadotropin-releasing hormone (GnRH) antagonist, elagolix, it sealed a deal with Abbott.

Abbott agreed to pay $75 million upfront to develop and globally commercialize elagolix for the treatment of endometriosis-related pain, and undertake Phase II studies for the treatment of uterine fibroids. Neurocrine, a bit of a comeback tale since losing lead asset indiplon a few years ago, also could earn up to $500 million in milestones, mainly tied to pre-commercial achievements, and will receive undisclosed sales royalties. In addition to endometriosis and uterine fibroids, Neurocrine believes elagolix could be used to treat prostate cancer and benign prostatic hyperplasia, since the drug lowers testosterone levels in men. Though Neurocrine had been in talks with several potential partners, Abbott's experience with the GnRH mechanism made it an ideal fit, President and Chief Executive Kevin Gorman told “The Pink Sheet” DAILY. Abbott sells Lupron (leuprolide), an injectable GnRH agonist, which is one of two approved therapies for endometriosis. Leuprolide also is indicated to treat prostate cancer, which Gorman said adds value to the deal since elagolix is in preclinical studies for this use.--Carlene Olsen

Neurocrine/Boehringer Ingelheim: Sequels aren't usually as good as the original and this is frankly no exception. But Neurocrine's second deal this week, announced less than a day after its deal with Abbott, is nothing to sniff at either.

Neurocrine on Thursday inked a pact with Boehringer Ingelheim to discover and develop small molecule GPR119 agonists to treat type-2 diabetes and other indications. Neurocrine gets $10 million up-front plus research funding and is elgible for development, regulatory and commercial milestone payments and royalties on any products BI develops from the collaboration. GPR119 is a GPCR thought to play a variety of roles in inducing insulin secretion; BI has made no secret of its desire to become a player in diabetes, though it hasn't done many deals. --CM

Covidien/Somanetics: Call it the Covidien Creep. Just as the medical device company moved slowly into the vascular and neurovascular business with the successive acquisitions of Bacchus Vascular, VNUS Technologies and this month's $2.6 billion acquisition of ev3 Inc., Covidien now is building its oximetry and monitoring products with its second sizable acquisition in less than a year with the purchase of publicly traded Somanetics Inc.

Covidien agreed to pay $250 million, or $25 per share, for the company, seller of the INVOS System, which measures blood oxygen levels in the brain of surgical patients so clinicians can detect and correct a variety of threatening complications. The technology pairs nicely with the Bispectral Index, the only system capable of measuring the effects of anesthesia and sedatives on the brain. Covidien added the Bispectral to its oximetry and monitoring group last year by acquiring Aspect Medical Systems Inc. for $210 million. The combined revenues from Aspect and Somanetics will add $150 million in annual revenue to the Oximetry and Monitoring group, which reported $636 million in revenue in each of the last two fiscal years. Even with the additional revenue, oximetry and monitoring will likely be the fourth largest in Covidien’s medical device unit but that could change with future acquisitions.--Tom Salemi
Basilea/Almirall: Switzerland's Basilea Pharmaceutia has signed on Spain's Almirall to be the exclusive distributor of Basilea's eczema treatment Toctino (alitretinoin) in 10 European markets and Mexico. Now Basilea can benefit from broader sales of Toctino without making costly investments to build its own commercial infrastructure in Austria, Belgium, Czech Republic, Italy, Luxembourg, Mexico, the Netherlands, Poland, Portugal, Slovakia and Spain.

At the same time, Almirall, a top 10 dermatology country in Europe, gains a novel therapy for its portfolio – Toctino is the only therapy approved for adults with severe chronic hand eczema unresponsive to potent topical corticosteroids. Almirall will make an upfront payment of €5 million, and Basilea also could receive milestone payments related to the launch of Toctino in two key markets of up to €11 million, plus €11 million more in pre-specified sales milestones. Basilea also retains the right to co-promote Toctino in selected markets. Though Basilea would not disclose its transfer price for Toctino, Merrill Lynch analysts estimate that the biotech will receive 44 percent to 55 percent of the product's revenues generated in Almirall's distribution markets. Toctino's fortunes are especially important for Basilea given the high-profile failure and break-up with Johnson & Johnson over its next likely commercial candidate, the anti-infective drug ceftobiprole. Since then, the biotech has made aggressive moves to regain its footing, including a licensing deal with Astellas Pharma earlier this year. --CO

image from flickr user emma.kate used under a creative commons license
Posted by Egypt Conflict at 9:30 AM