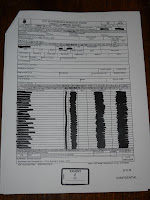 The Pittsburgh Citizen Police Review Board (CPRB) and the city will be back in court in August to make oral arguments as to why the heavily redacted documents given to the CPRB by the city do or do not meet a judge’s order to hand over materials needed to investigate police officers' actions during the G20 summit in September. At a contempt of court hearing today, CPRB lawyer Ward McGough argued that so much information was lined through that the documents are unusable. Paul Krepps, the attorney for the city, says if the information was not redacted the city could be in violation of privacy laws. The city also argued that releasing the data could in some cases jeopardize future operations. Along with arrest, incident, summons, subject resistance, and investigative reports, the board asked for operational documents such as the manual given to visiting officers and the insurance policy taken out by the city to cover the time around the G20. CPRB Executive Director Elizabeth Pittinger says because the information in the documents has been "blacked out" the board is unable to do its job. Pittinger notes that in other cases being investigated by the CPRB the city has handed over the documents without any redaction. The judge has given the city and the CPRB until August 26th to prepare for oral arguments. Between now and then there are several deadlines including a date to submit written arguments.

It has also been learned that the Pittsburgh City Council and the Mayor are submitting new names to fill the Citizen Police Review Board. The council and the mayor choose the seven-member board. All of the current members of the board are serving under expired terms. Some of them have been serving in that capacity for two years according to Pittinger. When asked to react to the submission of seven new names Pittinger said, “I think you would have to look upon it as a retaliatory act.”

Pittsburgh Mayoral spokesperson Joanna Doven says the approval of the board nominees on the same day as the court hearing was coincidental and in no way a retaliation. Doven says the 4 names from the council were submitted to the mayor 58 days ago and he had 60 days to review them and sign off on the nominations. Doven was also quick to point out that of the three nominations made by the mayor two are current CPRB members.
Posted by Egypt Conflict at 11:24 AM