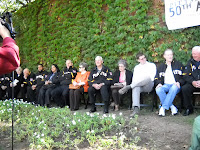 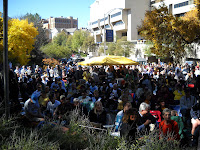 Several thousand people gathered in Oakland Wednesday at the spot where Pittsburgh Pirate Bill Mazeroski hit the home run that beat the Yankees in the final inning of the last game of the 1960 World Series.

A sidewalk plaque commemorating the 50th anniversary of the World Series -clinching home run was dedicated near where the Forbes Field Wall used to be. It shows an image of Mazeroski hitting third base and going for home.

Every year, hundreds of fans gather at the spot at the same time of the game to listen to a recording of the game in real-time.
Posted by Egypt Conflict at 12:07 PM