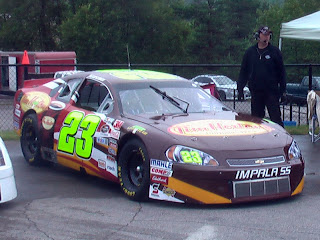 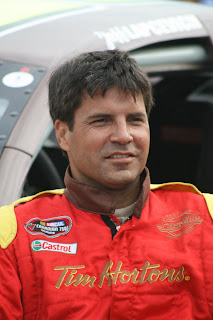 June 13, 2010, BOWMANVILLE, ON – Jeff Lapcevich is disappointed with his seventh place finish at Mosport. That's a great sign for Fastline Motorsports.
The Grimsby, Ontario, racer posted the fastest lap in Sunday's NASCAR Canadian Tire Series race, but a broken suspension component relegated the Tim Hortons-sponsored Chevrolet to a seventh place result.
"Seventh isn't a bad result, but I feel like we had a shot at winning," said Lapcevich. "The car was so fast early in the race, but we had an upper control arm come loose on the left front, and the car became a real handful to drive."
Once a dominant force on road courses Lapcevich showed signs of his former brilliance this weekend. He posted the third fastest time in practice on Saturday, but slower traffic in qualifying left him seventh on the grid to start Sunday's Vortex Brake Pads 200.
Lapcevich charged towards the front early, but an untimely caution period closed the pit area just as he was to stop for fuel. Forced to pit twice under yellow for service, Lapcevich restarted outside of the top 12, but he again charged through the pack.
By the midway point of the race Lapcevich neared the top five, but he started to lose the handle on his race car. DJ Kennington passed Lapcevich for sixth with less than two turns remaining. The Tim Hortons Chevrolet had a big enough gap on the eighth place car to maintain the position with a failing suspension.
"It feels great to be as competitive as we are," said Lapcevich. "But it would feel even better to get back to victory lane. I think we're close to where we need to be with the team, and our next races are events where we run well."
Lapcevich's next outing is NASCAR's debut on the streets of Toronto on July 17th. The popular lakeside course is one where Lapcevich earned great results with the CASCAR Super Series.
"We're looking for a win at Toronto," said Lapcevich. "We know the car is capable, and it would be great to have success so close to home."
For more information on the Fastlline Motorsports team and Jeff Lapcevich visit http://www.lapcevichracing.com/. The head shot of Jeff Lapcevich was provided by Dale Calnan/ ImageFactor.ca .
- 30 -
Posted by Egypt Conflict at 6:08 PM