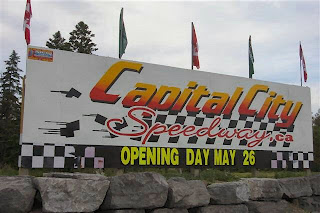 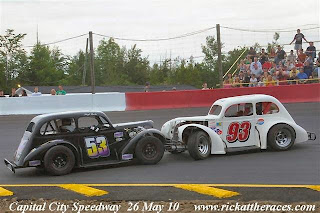 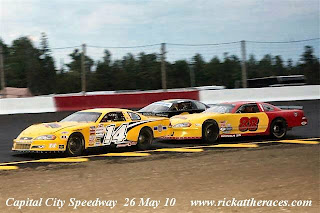 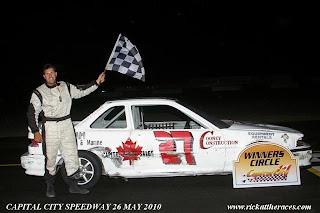 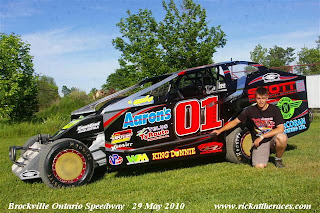 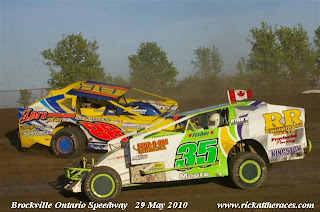 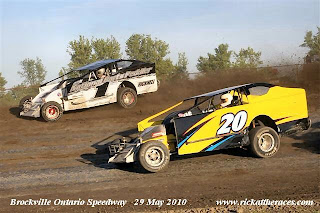 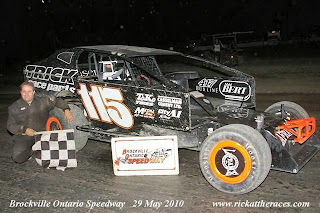 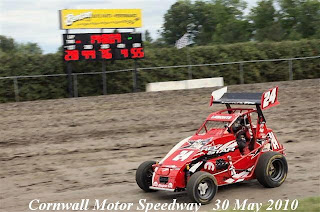 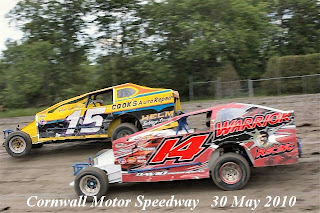 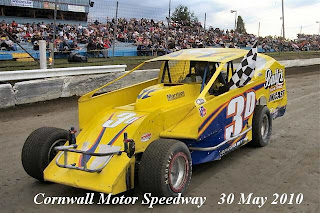 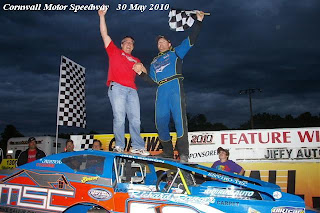 It has to be very unusual when a trip to the dentist can be remembered as welcome event but it happened to me last Wednesday (May 26) . My work shifts have recently changed which means my trips to Ottawa's Capital City Speedway on Wednesday nights will be limited this year. It all depends on what time I get finished at work. This week a painful tooth ache meant an emergency trip to my dentist. The 3-00pm dentist appointment meant a visit to the Capital City season opener was now viable.

This was the first night of promoting for new boss Jeremy Coulter and my first chance to see the new asphalt that has recently been laid . The track looked good and the race cars performed well on it. All the regular divisions were on hand ( Late Models, Thunder Cars, Legends, Mini Stocks and 4 for Fun) and did the normal program of two heats each.

Thunder and lightening had be seen in the distance and by feature time, we felt our first spots of rain. The first feature was for the Mini Stocks and as the checkers came down for Doug Mould , the heavens opened. Coulter's inaugural event had gone well, and it was a shame the night came to an end prematurely.

As mentioned before, things have been busy for me lately, and there is no sign of a recession where I'm working !  It was so crazy last Friday, there was no chance of me going racing. It was close to 10-00pm before I clocked out, so even attending my local Mohawk International Raceway was out of the question.

On Saturday night (23 May) I made my regular trip down Hwy 401 to the Brockville Ontario Speedway. As normal, I got there early enough to wander around the pits and catch up on the news . I spoke to Todd Stewart who was in the pits minus his Modified. He told me of his missfortune to blow the engine at Mohawk the night before. His plans for the evening were to use his nephew Luke's Sportsman so he could maintain his points.

As you can imagine, I've seen a lot of races in my time, and there's been a few great ones over the years that will always stick in my mind. The Modified feature turned out to be one of those. It was a classic !  For the first part of the race there had been a good duel between Stephane Lafrance and Bill Gill. Lafrance got ahead and built up a commanding lead, while in the meantime Danny O'Brien was carving his way through the pack. As the race went into the last quarter O'Brien had caught up with the complacent Lafrance who by now eased off a 'tad'. When the 'Pocket Rocket' pulled along side, his siesta was over as the 'Little Hammer' turned up the burners and went back into fast mode. The last segment of the race turned into one of the best and cleanest duels you could ever wish to see. Two drivers with great respect for each other battled it out side by side to the flag. As the checkers fell it was 'Steph' at the front to claim his second victory in as many nights ( He won at Autodrome Edelweiss Que the night before)

The next day found me at work organizing the Victory Lane photos at my local Cornwall Motor Speedway. This week the Sportsman division took a night off and in their place were the Speedsters. ( the Tobias Speedsters are basically small wingless sprint cars) . The group that runs in this area of Canada is organized by Martin Roy ( one of Brett Hearn's Crew men) who is based in Victoriaville Quebec. One of my friends Lee Ladouceur was doing double duty that night by guest driving one as well as piloting the Warier Racing Team 358 Mod of Junior David. Another Modified driver who was out in a Speedster was Sebastien Gougeon who went on to win their feature.

Akwesasne NY's Louie Jackson took the checkers in the ProStock feature while Alexandria's (Ont) Joel Doiron was the 358 Modified victor. Whilst mentioning the Mods, I have to say congrats to young Dexter Stacey who did well and gained a good heat win. Derek Cryderman was the Semi Pro winner and Ronnie Tyo did like wise in the Mini Stocks

The weather had been teasing us all night with the occasional showers, but we got the show in , and it was all over before 9-30 pm too.

PIC  2 Troubles for two Legend drivers at the CCS opener

Posted by Egypt Conflict at 5:36 AM