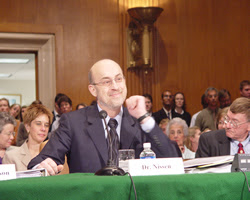 The New York Times ran an interesting profile of the Cleveland Clinic's Steve Nissen on Sunday in light of his "controversial" meta-analysis finding over a 40% increased risk of heart attack for diabetes patients on GlaxoSmithKline's drug Avandia.

I interviewed Dr. Nissen a few months ago. Check out our July issue of The RPM Report called "Inside the Mind of a Serial Drug Killer" to find out what makes him go, what would make him stop and what he thinks is driving some members of Congress to criticize his efforts. Note, the Times may have higher circulation than The RPM Report , but we had the better headline.

But don't take our word for it. Here are a couple of excerpts:

The RPM Report: What would make you stop doing this type of work in the area of drug safety?

Nissen: It is all of our jobs, not just the FDA’s job to do this. Those of us in the physician community owe it to our patients to give equal balance and weight to positive and negative findings about drugs, and so should the FDA. Even if the FDA were doing an outstanding job, it’s still the responsibility of independent scientists to do these sorts of things, so it really isn’t about the FDA.

The RPM Report: So creating two drug centers—one for premarket review and one for postmarket surveillance—would not stop you from doing this kind of research. You feel this is a moral obligation.

Nissen: It is a moral and ethical obligation; it’s just about good science, it’s a scientific obligation. Science is about pursuing the truth and wherever that leads you. If we had very, very good regulatory agencies looking after this, there may be fewer opportunities to turn these things up.

How did we find out about fen-phen? There was an independent group of physicians that began seeing fen-phen patients with valve abnormalities. They said, “Oh my God, this is a potentially serious problem, let’s publish it,” and they did a great thing, they probably saved a lot of lives; they’re heroes.

The RPM Report: Why is there such a visceral reaction to you and the research you are doing? FDA’s meta-analysis of Avandia studies showed similar findings as your meta-analysis.

Nissen: Right. Part of the problem is this is not about me. One of the issues is sometimes when you don’t like the message; it’s easier to attack the messenger. It’s to be expected, but we’ve got to keep everyone focused on the science. I was very restrained in that [Avandia] hearing, I didn’t attack back. I simply said: this is what we did, this why we did it, this is why it’s important, and I’m going to stay on that message because it’s the right thing to do.

The RPM Report: Rep. Darrell Issa (R-Calif.) seemed particularly unnerved by your analysis and the process you took to get it published?

Nissen: He was wrong about the statistics, you cannot calculate an effect size if there are no events [studies with no heart attack events were excluded from Nissen’s meta-analysis]. He had been briefed by people giving him campaign contributions and that happens to be GSK. I looked it up. The three people on the attack at the hearing were very heavy recipients of GSK campaign money.

For the rest of the interview, subscribe to The RPM Report. Also, Nissen will be speaking at our annual FDA/CMS Summit in December in Washington, D.C. in case you want to hear him in person.

Speaking of Avandia, there is a July 30 fact-gathering meeting between FDA and Glaxo (Takeda, which markets Actos, is an invited guest) regarding the cardiovascular profile of the diabetes drug. While something conclusive could come out of that meeting, it's highly doubtful. So we'll just have to wait and see whether Nissen and his meta-analysis are vindicated for finding risks that hadn't been previously uncovered or his findings were rushed, sloppy and wrong. Stay tuned. It could be a while.

Posted by Egypt Conflict at 5:08 AM