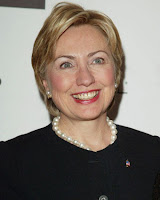 Slow summer so far. Not a lot going on. Washington is ready to go on its August hibernation. So I thought I would drop this quick note to jumpstart some watercooler talk before everyone goes to the beach.

Democrats are champing at the bit at their chances of regaining the White House in 2008. While there will be trench warfare over Medicare Part D drug prices and universal healthcare, one area that's sure to change (I'm not going out on a limb here) is personnel.

While the candidates themselves probably don't have a clear idea of who they would choose to lead key government agencies, they at least know who they like and who they trust on certain public policy issues.

Therefore, I found it interesting to see who Hillary Clinton had standing beside her during a campaign appearance "block party" in Washington, D.C. in June. It was Susan Wood, former women's health head at FDA, who resigned from the agency in protest over the delay in approving the switch of the morning-after pill from prescription to OTC. Wood stood next to Clinton, along with many other prominent women, including former Secretary of State Madeline Albright, during the outdoor event, which took place in the heart of downtown. Wood has not been shy about her support for Clinton. And neither has Clinton been shy in her support for Wood. During FDA Commissioner Andrew von Eschenbach's confirmation hearing before the Senate Health Committee, Clinton singled out Wood, in attendance, for her courage in resigning her post over the morning-after pill.

Wood is now a research professor at the George Washington University School of Public Health and Health Services. Under President Hillary Clinton, would Wood go back to FDA? Would she consider the job of commissioner if Clinton calls her to duty? I asked her.

"The first is easy, I truly enjoyed working in government health policy for 15 years, and so would be happy to come back to FDA in the future if an opportunity ever arose," Wood said via email. "I haven't ever considered the second one, and it is so hypothetical I don't know how to answer it, sorry." I bet I know what she would answer to the second question, and it's this.

I wonder how the drug industry would react to a Susan Wood FDA?

Next: Sam Brownback's FDA
Posted by Egypt Conflict at 1:21 AM